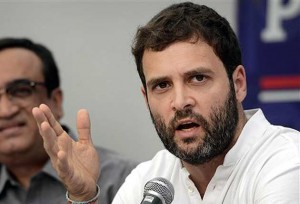 AMETHI: The Prime Minister is playing the drums in Japan, while at home, a power crisis and rising prices are plaguing the nation, said Congress Vice-President Rahul Gandhi. “100 days of this government are over…it has forgotten its promises,” said the 44-year-old, alleging that Prime Minister Narendra Modi’s government has reneged its promise to tackle corruption and other issues.
Mr Gandhi’s comments were made in his constituency of Amethi, where he had earlier faced a litany of complaints from residents on long power cuts. (‘Rahul’s Own Party Doesn’t Listen to Him, Why Should We?’: BJP) Mr Modi returned yesterday from a five-day trip to Japan where he delivered a series of applauded speeches and photo-ops – on one occasion, he played the drums; on another, he broke the security cordon at the Indian embassy in Tokyo to greet supporters across the street. (From Playing Drums to Meeting Fans, the Modi Touch is Visible) He has returned with a commitment from Japan to invest nearly 34 billion dollars over the next five years in key infrastructure projects and the cleaning of the river Ganga.
Mr Modi exhibited his much-acclaimed oratory skills throughout the visit. “I am a Gujarati, money is in my blood, I understand business,” he told a group of Japanese businessmen. “Red carpet, not red tape, awaits you in India” he promised another. Mr Modi’s government completed 100 days in office this week. In May, his party, the BJP won a stunning victory in the national elections, accruing the strongest mandate for a political party in 30 years.
Mr Gandhi led the campaign for the Congress which locked down its worst ever performance. But for his party, centred on the dynastic rule of the Gandhis (Rahul’s mother Sonia is President), criticizing the First Family is a firm no-go zone. A report dissecting the party’s failure in the election said Mr Gandhi could not be held responsible for the debacle. In the face of criticism from his party’s old guard, who have publicly questioned his leadership, Mr Gandhi said, “These types of tensions have always been there. We will deal with that.”