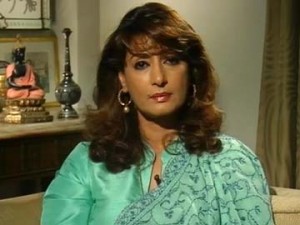 NEW DELHI :Doctors from Delhi’s AIIMs hospital who conducted an autopsy on the body of Sunanda Pushkar Tharoor, wife of union minister Shashi Tharoor, said they were “investigating a case of sudden unnatural death.” The doctors also spoke of injuries on Mrs Tharoor’s body but refused to reveal more information.

“We are focusing on investigating the reason for the sudden unnatural death. In view of that, all injuries (on Sunanda’s body) have been photographed and filmed. Nature of injuries can’t be revealed but there were certain injuries,” said Dr Sudhir Gupta, one of the three doctors who conducted the post-mortem. He also said that samples taken to determine if she died of poisoning are yet to be analysed. The final report, he added, will be concluded in a “couple of days”.
After the autopsy, Mrs Tharoor’s body was shifted in an ambulance to the Tharoors’ Lodhi Road residence in south Delhi. Mr Tharoor left the hospital in another ambulance. After friends and family paid their homage, the body was taken to a crematorium in the area where her last rites are currently taking place.
Mrs Tharoor, 52, was found dead in the posh Leela Hotel last night, days after she alleged that her husband was having an affair with a Pakistani journalist, who she targeted in a series of angry tweets.
Mr Tharoor, 57, complained of chest pains this morning and was admitted to the same hospital. The junior minister for Human Resources Development was discharged a little before noon. His statement was recorded by the Delhi Police very late last night.
Mrs Tharoor’s iPad and iPhone have been picked up by the police from the hotel suite where she was staying.  CCTV footage from the hotel is being examined by the police, which is also questioning hotel staff.
Yesterday, Mr Tharoor attended a mega-conference of his Congress party.  When he returned to the Leela Hotel, at about 8.30 pm, his wife did not respond to requests to open the bedroom door.  The minister accessed her room with help from the hotel staff and found his wife lying dead on the bed.
His assistant told NDTV that the couple had checked into the Leela Hotel on Thursday because their house was being painted. However, Mrs Tharoor had told NDTV on Wednesday evening that she had moved into the hotel alone and that she was “heart-broken” because she had discovered a series of text messages that proved an alleged affair between her husband and Pakistani reporter Mehr Tarar.
But on Thursday, the Tharoors issued a joint statement in which they said they “are happily married and intend to stay that way.”