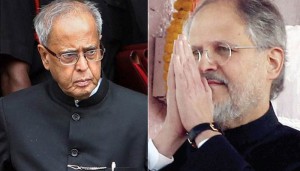 NEW DELHI: is expected to get a government soon as the President is reported to have given his nod to the Lieutenant Governor to explore options for government formation.Sources said that President Pranab Mukherjee has replied to LG Najeeb Jung’s September 5 letter and permitted him to explore all options in Delhi.
The LG is now expected to invite the Bharatiya Janata Party (BJP), the single largest party in the national capital, to form the government in Delhi.
The Centre will later today also inform the Supreme Court about the President’s advice, as the top court has been hearing a petition on government formation in Delhi. The Centre will also make its stand clear on government formation.
The Aam Aadmi Party (AAP) had filed the petition in the apex court seeking dissolution of the Delhi Assembly and notification of fresh polls. Of late, it has been accusing the BJP of trying to poach its MLAs to muster majority for forming the government in Delhi.The President’s nod came just days after the Election Commission announced that bypolls to three vacant Assembly seats – Mehrauli, Tughlakabad and Krishna Nagar – will be held on November 25.
The bypolls present an opportunity for the BJP to increase its numbers in the hung Delhi House. BJP candidates had originally won from all three constituencies going to bypolls but the seats fell vacant after the MLAs contested Lok Sabha polls and won.
The BJP, at present, has 28 MLAs and its ally, Shiromani Akali Dal, has one. The AAP is the second largest party with 27 MLAs, while the Congress is a distant third with 8 seats.