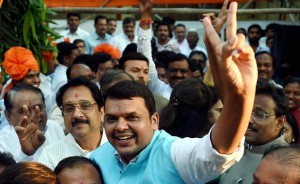 MUMBAI: On Friday, Prime Minister Narendra Modi will watch as his party forms the government in Maharashtra for the very first time – at a grand ceremony at Mumbai’s famous Wankhede Stadium, a small cabinet of ministers from the BJP will take their oath. They will be led by 44-year-old Devendra Fadnavis, who is expected to be elected Chief Minister at a meeting of BJP lawmakers today.
Top BJP leaders say that the party is comfortable with its government being in a minority to start with. That will tighten the squeeze on the Shiv Sena, which has recently abandoned any coyness about its desire to team up with its former ally. “The BJP and Shiv Sena have the same blood group,” said the Sena’s Sanjay Raut.
But the BJP, which has multiple safety nets to choose from, has made it clear that if it remarries the Sena, terms and conditions will clearly recast the 25-year alliance which ended bitterly in September. The Sena had been the heavyweight in the relationship all these years; now, it is reduced to a dependent.
If that is not acceptable to the Sena, which has traded pique for propitiation in recent days, the BJP has an open offer of support from Sharad Pawar’s party, the NCP. Even if it chooses not to team with Mr Pawar, the NCP has said it will abstain during a trust vote in the legislature, delivering the BJP government to a high-comfort zone. BJP leaders have also said they are racking up independent lawmakers to add to the government’s strength.
By choosing not to close off any of those options, the BJP means to extend the anguish of the Sena, which placed second in the election, and is now reduced to a party-in-waiting. Its entry point to power is now controlled entirely by the partner who it insulted and abused in a vicious campaign.