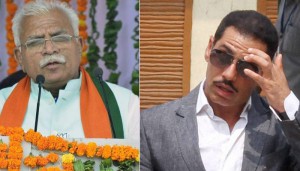 CHANDIGRAH: Hours after Manohar Lal Khattar took oath as Haryana’s Chief Minister, cabinet minister and Bharatiya Janata Party (BJP) leader Anil Vij said on Sunday that Haryana’s new government will investigate all controversial land deals made by Congress chief Sonia Gandhi’s son-in-law Robert Vadra.
“We will inquire into all land scams including the one involving Vadra land deal. Sitting Judge will probe the case,” Vij told reporters here.The BJP leader further said, “We will also see whether the law was violated in acquiring land for different projects during (the previous) Hooda government.”
“We will get every inch of this land scam probed. Anyone found guilty in that, whether any official, Robert Vadra or Bhupinder Singh Hooda, we will not spare anyone,” Vij added.He also said that the Congress and other parties had pushed Haryana deep into corruption in the past 48 years.”Our priority is to take the state out of this mess. There is a new dawn in Haryana. People have a lot of expectations from this government,” he added.
Senior-most minister in Chief Minister Manohar Lal Khattar’s government Ram Bilas Sharma also asserted that Vadra land deals will be probed. “We are certainly opening those cases. A sitting high court judge will inquire into these,” he said.
“(Former chief minister Bhupinder Singh) Hooda’s main problem was that instead of looking after the interests of Haryana, he was safeguarding the interests of Sonia Gandhi,” Sharma added.
Meanwhile, Congress leader Rashid Alvi hit back and said, “Hindustan ko Pakistan mat banaiye, Pakistan se ye mat seekhiye ki jo ata hai wo peechli sarkar par kaaryawahi karta hai.”Prime Minister Narendra Modi too had earlier raised the Vadra land deal during poll rallies and urged the Election Commission (EC) to look into it.
As per the sources, the new government is likely to cancel the three-acre deal in Shikhopur village that brought allegations of corruption to the doorstep of 10 Janpath and shook the foundations of UPA-2 ahead of the Lok Sabha elections.Earlier in the day, Manohar Lal Khattar, mentored by RSS and known for his organisational skills and clean image, took oath as Haryana Chief Minister, leading the first BJP government in the state since it was created 48 years ago.
PM Modi, with whom 60-year-old Khattar shares proximity, BJP President Amit Shah, Union Ministers, veteran leaders LK Advani and Murli Manohar Joshi and Chief Ministers of four BJP ruled states were present as the ten-member ministry was sworn in at a ceremony here by Governor Kaptan Singh Solanki.
A first time MLA, Khattar, who has a four-decade-long association with Rashtriya Swayamsevak Sangh (RSS) and BJP, is the first Punjabi to become the Chief Minister of the state.Khattar is also the fifth non-Jat Chief Minister of the state and the first in last 18 years.With Agency inputs