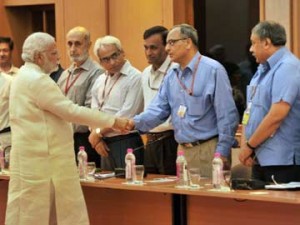 NEW DELHI : Prime Minister Narendra Modi on Wednesday met the secretaries of all the government departments collectively and said that he was accessible to all officers. He encouraged them to approach him with their inputs and ideas to make the government people friendly.
In the meeting in New Delhi with 77 top bureaucrats that lasted over two-and-a-half hours, the Prime Minister expressed ‘full faith in their commitment and competence to build a better future for the country.’
“Had a very fruitful meeting with Secretaries. Heard their views & asked to simplify administrative processes & make Govt. people friendly (sic)” Mr Modi wrote on Twitter after the meet.
“We talked about institutionalizing processes as they will last longer than any individual and give better results to the people… I shared my views on the importance of teamwork and usage of technology, which has the potential to address people’s grievances,” he also tweeted.
Such a meeting has taken place after more than eight years. During the meeting, Mr Modi made initial remarks and then asked secretaries to raise issues.About 25 secretaries spoke on the sectoral issues under their responsibility. “Discussions focused more on making governance more effective,” the Press Trust of India says quoting a source.
Sources said 16 groups were formed by clubbing related ministries. All finance ministry departments were grouped together, while secretaries of energy-related departments – power, coal, oil, mines and atomic energy were put together.
The Prime Minister called upon the senior bureaucrats to simplify and streamline the administrative rules and procedures to make them people-friendly. The Prime Minister asked the secretaries to identify and do away with archaic rules and procedures as “they are leading to avoidable confusion.”
He added that the process of governance of his government should begin with cleaning-up of the offices, improving the workplace, which would automatically result in a better work culture and efficient services to the citizens.
PM Modi emphasized the need for use of technology for greater efficiency and effectiveness in administration. He further added that in a democracy, redressal of citizens’ grievances is very important, and information technology can help greatly in this regard.