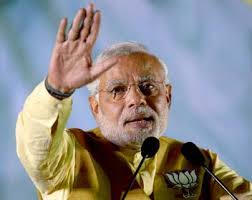 NEW DELHI : Prime Minister Narendra Modi and US President Barack Obama could hold their first bilateral meeting in September, when Mr Modi travels to the US for a UN meeting, sources have told .According to reports, the bilateral meeting could be held in Washington likely between September 26 and 30, and not in New York where the United Nations General Assembly summit will be held.
The invitation for the bilateral was extended when Mr Obama called Mr Modi to congratulate him after he took oath as PM. The prime minister is likely to accept the invitation, sources said.”The President noted he looks forward to working closely with Mr. Modi to fulfill the extraordinary promise of the U.S.-India strategic partnership, and they agreed to continue expanding and deepening the wide-ranging cooperation between our two democracies.
The President invited Narendra Modi to visit Washington at a mutually agreeable time to further strengthen our bilateral relationship,” a statement released by the White House a day after Mr Modi took charge, had said.The Indian ambassador to the US is scheduled to visit India on June 8 for briefings with the Prime Minister’s Office.Meanwhile, a top American Senator has called for holding the next round of India-US Strategic Dialogue in New Delhi this year as against the scheduled venue of Washington as a goodwill gesture towards the new Narendra Modi-led government.”The (India US Strategic) Dialogue (in New Delhi) would provide an early opportunity for the US Government to engage with the new Government in India,” Senator Mark Warner told a Washington audience yesterday.
“Since the new Indian government will just be getting started, holding the dialogue in Delhi will be less disruptive and will provide both sides the opportunity to meet and get to work early in the term on joint initiatives,” he added.
The strategic dialogue, which was launched by the previous Secretary of State, Hillary Rodham Clinton, is held every year alternatively in India and the United States. Last year it was held in New Delhi, for which the US Secretary of State, John Kerry, travelled to India. It is scheduled to take place in Washington this year.