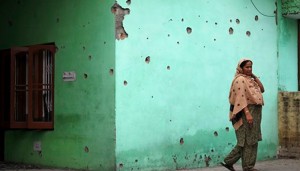 JAMMU: In another ceasefire violation, at least nine civilians were injured on Monday night in heavy firing and mortar shelling by Pakistan along the International Border in Jammu district, said a Border Security Force spokesperson
Breaching the ceasefire for the 17th time this month, Pakistan Rangers targeted 40 Border Out Posts and 25 border hamlets by resorting to heavy mortar shelling and firing along the International Border in Jammu and Samba districts of Jammu and Kashmir.
BSF troops gave a befitting reply to four ceasefire violations by Pakistan, resulting in exchanges, which are still on in some areas.”Pakistani Rangers again resorted to unprovoked mortar shelling and heavy firing on BSF posts along the International Border (IB) since 2100 hours last night”, BSF Spokesman Vinood Yadav said today.
“As many as 40 BSF BoPs were affected by the firing from Pakistan side”, he said, adding that firing and shelling was targeted on areas along IB in Arnia, RS Pura, Kanachak and Pargwal sub-sectors along IB in Jammu and Samba districts.
Giving further details, he said almost all the BSF posts in Kanachak and Pargwalwere targeted by the Pakistan Rangers.
BSF posts in Arnia and RS Pura sub-sectors were also also targeted by the enemy, the spokesman said.”BSF troops at all the places gave a strong and befitting reply to firing from Pak”, the spokesman said, adding that firing in some places, particularly Pargwal, is still on.”There is no loss of life or damage to BSF”, he said.
There has been heavy firing and mortar shelling on 20 to 25 border hamlets along the IB in Arnia, RS Pura, Pargwal, Ganjansoo and Kanachak belts of Jammu district since last night, District Magistrate, Jammu, Ajeet Kumar Sahu told a news agency.n Over 1,000 people have been accommodated in camps overnight.Over 20,000 villagers fled their homes in three districts along the international border, police said today.The villagers from Jammu, Samba and Kathua districts have fled their homes following the firing.
“The injured have been shifted to a hospital. The BSF (Border Security Force) is retaliating the Pakistan firing,” police said.This was the 17th ceasefire violation along the Indo-Pak border in Jammu and Kashmir since October 01.Six persons have been killed and 50 others including BSF jawan injured in Pakistani shelling and firing along LoC and IB in Jammu and Poonch districts in the ceasefire violations this month.
There have been nine ceasefire violations along the LoC and eight along the IB in Jammu. These include seven in Poonch along LoC, eight along International Border in Jammu and two in Gulmarg sector of Kashmir.On October 06, Pakistan had violated the ceasefire thrice in Bhimber Gali, Kerni and Balakote-Mankote in Poonch district.
On October 05, there were two ceasefire violations. Pakistani troops violated the ceasefire by resorting to unprovoked and heavy firing and shelling in Arnia belt along IB in Jammu in which five persons were killed and 34 others were injured.There was another ceasefire violation during the day when Pakistani troops targeted forward India posts along LoC in Balnoie sub-sector of Poonch district.
On October 04, Pakistani troops resorted to heavy firing and mortar shelling along LoC in Poonch district of Jammu and Kashmir, drawing equal retaliation from the Army.
The Pakistan Rangers violated the ceasefire four times on October 03 by shelling forward areas and villages along LoC and International Border in Gulamarg sector of Kashmir Valley and Poonch and Jammu sector in which a girl was killed and six persons were injured.
On October 01 and 02, Pakistani troops had violated the ceasefire twice along the LoC in Poonch district resulting in injuries to six persons.Pakistani troops had targeted civilian hamlets on October 02, leaving six persons injured.
The Indian government said its forces were responding to the “provocations” and the firing was not conducive to normalising relations between the two countries.
Defence Minister Arun Jaitley said in New Delhi that defence forces and paramilitary forces were “fully ready and are responding to each of their (Pakistan’s) provocations”.
He said the environment being created by Pakistan will not help in normalising relationship between the two countries.Home Minister Rajnath Singh in New Delhi said that Pakistan “should understand the reality that times have changed in India”. He said that he had asked BSF director general DK Pathak to rush to the border areas where incidents of ceasefire violations had been reported.
Pathak, who rushed to RS Pura yesterday and reviewed the situation, had said that he did not expect shelling on Eid day.
Pakistan has, in turn, lodged “a strong protest” with the Indian government over “unprovoked firing” by India and alleged that violation of the ceasefire by Indian security forces had led to the deaths of four civilians.The Indian Army guards the LoC while paramilitary BSF guards the international border in Jammu and Kashmir.