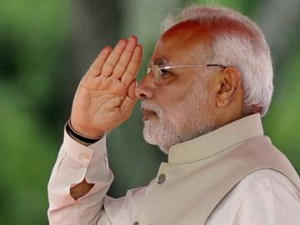 NEW DELHI : Prime Minister Narendra Modi is likely to speak extempore when he makes his first Independence Day speech from Red Fort on Friday. If he does, he will probably be the first prime minister to do so without a script.Mr Modi will reach the historic fort at around 7.20 a.m., and after a guard of honour by the armed forces, hoist the national flag.
His speech, which is likely to last 45 minutes to one hour, is set to break new ground in more ways than one.For the first time, more than 10,000 people will get free seats at the Independence Day function.The PM had asked four ministers to help him with what he plans to say.
Law Minister Ravi Shankar Prasad, HRD Minister Smriti Irani, Chemicals and Fertilizers Minister Ananth Kumar and Power Minister Piyush Goyal were asked to coordinate with different ministries and prepare a blue-print.
On August 14 last year, Independence Day eve, Mr Modi had challenged that his August 15 speech in Gujarat, as chief minister, would draw as much attention as that of then Prime Minister Manmohan Singh’s from the Red Fort.
On Independence Day, he had begun his speech from a college in Bhuj about half an hour after Dr Singh spoke and had criticised the latter’s address as uninspiring and disappointing. Pumped up BJP leaders had wagered that Mr Modi’s next Independence Day speech would be at Delhi’s Red Fort.