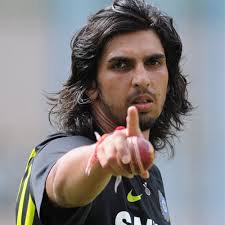 LONDON: In the build-up to the fifth and final Test against England, India on Wednesday regrouped here at the Oval as they looked to put behind the disappointment of their embarrassing innings defeat in the last game, even though skipper MS Dhoni was a notable absentee at the nets.
However, the Indian team received a major boost ahead of their must-win game, as medium-pacer Ishant Sharma was deemed fit again.The hosts lead the five-match series 2-1 after four Tests, with the visitors having crashed to an innings-and-54-run defeat at Manchester within three days in the fourth game. Since then, this was the first time this touring squad took to the nets.
Rain came incessantly in Manchester after their surrender on day three on August 9 and the players kept to the team hotel taking some time off from cricket. They travelled back to London yesterday and today looked to regain some energy and spirit going into the final Test, starting on Friday.
For one man though, three days off weren`t enough. Dhoni missed today`s practice session and the official word from the team management was that the wicketkeeper-batsman was just taking some rest and spending time with his family after the nearly five-hour bus journey the day prior.In his absence, coach Duncan Fletcher and vice-captain Virat Kohli led the team in practice.
The Delhi seamer Sharma returned to London before the rest of the squad and had a session at the Oval yesterday. He bowled for a long duration during nets today as well.The final decision on his fitness will, in probability, be taken on Thursday when Dhoni is expected to come to the net session.The last time Sharma was the part of the playing eleven, he turned out to be the key player in India`s 95-run win in the second Test at Lord`s.If he is assessed fit to play in the final Test, the Indian pace attack, which has looked light-weight in Sharma`s absence, would get a major boost.
Meanwhile, the English team is sufficiently fit and rested as the entire squad regrouped and practiced hard two days before the match. The only absentee from the nets was speedster Stuart Broad, who is nursing a broken nose after being hit by Varun Aaron at Old Trafford.
Even as Broad turned out in a protective face-mask, the management said that the injury will not be hampering his availability for the final game with England looking to close out a first Test-series win in a year.”It`s not (looking) very pretty. He`s not got his `boy-band` looks you`d normally associate with Stuart,” said Joe Root, half-jokingly. “He`s milking it definitely as you`ll probably have seen on all the social network sites. But I`m sure he`ll be desperate to play on Friday. He`s obviously in good form and will want to finish the series strongly with the rest of us.”
With a perfect 266-run win at Southampton followed by another comprehensive victory at Manchester, England have all the momentum they need to win at the Oval too.Indeed no one will bet against them at the moment. But cricket is a funny game, and with its dry-spin friendly nature, the Oval pitch might just spur the visitors on to make a final impression in the Test series.
“We`re definitely not going to take India lightly,” said Root. “We know they`re going to come very hard at us, and we`ll have to make sure we`ve got all bases covered and not be caught off guard.”Asked pertinently of England`s chances of winning the series at the Oval, the young batsman replied, “It is exciting. We`ve had a couple of days to reflect on the last game. We`ve not been in this position for a while with the opportunity to win a series. There are a lot of new faces around and a lot of people will want to make sure we play the cricket we have over the last couple of games.
“We will really try to nail down what has been a good little bit of form in the last two games. We will not rest because we have won the last two games. If we can make it three in a row, it will be great.”
A major difference in the build-up to this particular match is the absence of the buzz of James Anderson-Ravindra Jadeja saga. While the matter was solved ahead of the fourth Test, the verdict had just been announced ahead of that match.Root pointed out that the matter indeed helped their side.
“The good thing that came from that was we didn`t let it affect us. That was may be one way where we did get slightly tighter as a group. It gave us another incentive to want to throw a punch back at them,” said Root.May be India, too, can come together, start afresh, and salvage some pride in this final Test.