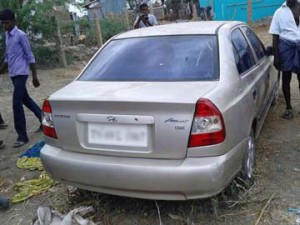 CHENNAI: Four children who climbed into a stranger’s unlocked and parked car have died today in Tamil Nadu.The children were between 4 and 10 years old and were attending a temple festival with their parents at Vedanatham village in the Tutcorin district of Tamil Nadu.
The car they entered was parked at a yard filled with cars seized from bank loan defaulters, the police said.
Devastated parents accepted their children’s bodies after initially refusing to accept them. Ms Muthalammal, a relative of one of the children who died, said, “The police should take strict action. Only because they didn’t lock the car this has happened.”
Nobody has been arrested. “The children perhaps locked themselves in but did not know how to open the door,” said a senior police officer handling the case.