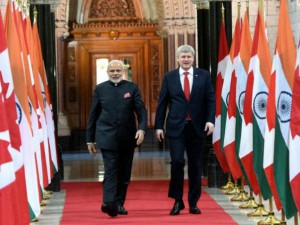 TORONTO: Prime Minister Narendra Modi in the last leg of 3-nation tour, addressed the Indian Diaspora in Toronto’s Ricoh Coliseum on Wednesday, and said “There is one solution to all the problems and that is development”.During his speech at Ricoh Coliseum, Prime Minister Modi said, India is a large country and it will take time to clean.
“There is a new atmosphere of trust in our nation. India is a large country and it will take time to clean, Adding that the problem is old and it will take time but you can see there is a change in the people.”“In times of crisis we do not see the colour of anyone’s passport. We do everything possible for people,” he said.
He stressed on “Skill India” and said that skill development can lead any country towards development.“We want our youth to be job creators not job seekers. Skill development is very important.I can tell you, India has the strength, what is needed is opportunity,” Mr. Modi said.
Mr. Modi while highlighting the India’s successful mission mars, said the mission was an example of Indian talent; as India reached mars on price less than making of a Hollywood film.“Our Mars mission cost less than what it takes to make a Hollywood film… Our cost worked out to less than an auto rickshaw ride in any Indian city at Rs. 7 per km.
Prime Minister while wooing the Ricoh Coliseum crowd said, earlier our identity was “Scam India” we have to change the notion around the world now to “Skill India”.“Earlier India was known as ‘Scam India’, we want it should be known for ‘Skill India’” Mr. Modi said.
Earlier, Narendra Modi arrived at the Toronto Pearson International Airport, travelling from Ottawa with his Canadian counterpart Stephen Harper, along with the latter’s wife Laureen on the same aircraft.Mr. Modi was greeted by a large number of the Indian community here, who clicked photos, before shaking hands with the Indian Prime Minister.