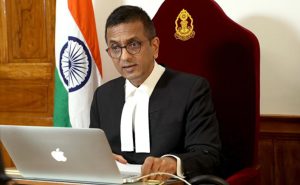 NEW DELHI : Chief Justice of India DY Chandrachud on Saturday spoke about the fear of being targeted for granting bail to convicts who have committed heinous crimes, thus prompting them to be reluctant to pass judgement. The top judge was speaking at a felicitation event organised by the Bar Council of India that was attended by Union Law Minister Kiren Rijiju.
Speaking at the event he said, “The higher judiciary is flooded with bail applications due to reluctance at grassroots to grant bail. Judges at the grassroots are reluctant to grant bail not because they do not understand crime, but there is a sense of fear of being targeted for granting bail in heinous cases.” Justice Chandrachud said on Saturday that judges at the grassroots are hesitant to grant bail because they are afraid of being targeted for doing so in heinous cases. CJI Chandrachud said this at a felicitation event hosted by the Bar Council of India.
According to LiveLaw, CJI Chandrachud said, “The way we look at the district judiciary affects deeply our own personal liberty as citizens. If district judges do not have the confidence in their own abilities, in their own respect in the hierarchical system, how would we expect a district judge to grant bail in an important case.”
He was speaking at a function organised by the Bar Council of India to felicitate him on being appointed as the CJI. He said the higher judiciary is getting “flooded” with bail matters because of the reluctance at the grassroots level to grant bail. “And why judges at the grassroots are reluctant to grant bail, not because they don’t have the ability, not because the judges at the grassroots don’t understand the crime,” he said, adding there is a “sense of fear” among the judges at the grassroots that if he grants bail “will somebody target me tomorrow on the ground that I granted bail in this heinous case”.
“This sense of fear nobody talks about, but which we must confront because unless we do that we are going to render our district courts toothless and our higher courts dysfunctional,” he said. Why should one distrust any person who grants relief to a citizen, he asked.
He said much has to be done for improving the service conditions of the district judiciary. “But above all, we have to bring to our district judiciary a sense of dignity, a sense of self-worth, a sense of confidence in their own respectability, which is why I always say our district judiciary is not a subordinate judiciary,” he said.
He said the apex court may lay down “big ticket judgments” on important issues, but the district judiciary defines the peace, the happiness, tranquillity and faith of the common citizens.
The CJI’s comments have come against the backdrop of the Supreme Court emphasising that bail remains the rule and jail is the exception. Despite this, several political prisoners – including activists and journalists – have been repeatedly denied bail. Umar Khalid, who has been in jail since September 14, 2020, over what the Delhi police have claimed is his connection with the ‘larger conspiracy’ behind the northeast Delhi riots, has been denied bail several times.
After spending 23 months in jail, Kerala journalist Siddique Kappan, who was arrested in October 2020 while on this way to cover the Hathras gangrape in Uttar Pradesh, was granted bail in September. Sharjeel Imam was granted bail in September in a sedition case in which he was accused of instigating violence at Jamia Millia Islamia University in 2019. However, he is still under judicial custody as the Delhi Police also considers him an accused in the 2020 Delhi riots conspiracy case. In the Elgar Parishad case, 84-year-old tribal rights activists Stan Swamy was repeatedly denied bail despite raising serious concerns over his health. He passed away in July last year after he had contracted COVID-19 in prison.
Meanwhile, Rijiju raised concerns over the lawyers meeting CJI for transfers. “I heard some lawyers want to meet CJI regarding the transfer case. It can be an individual issue but if it becomes a recurring instance for every decision by the collegium which is supported by Government then ‘Where will it lead to’, whole dimension will change,” Rijiju said.
Justice Chandrachud is known as a progressive and liberal judge of the country. He is also considered very sensitive to the fundamental rights of citizens and the most distinctive feature of Justice Chandrachud is known for his tough attitude towards the abusers. Justice of India D.Y. Chandrachud on Saturday, November 19, stressed the need to learn to trust the district judiciary, saying it would truly answer the needs of common citizens who seek access to justice.
(With Agency Inputs).