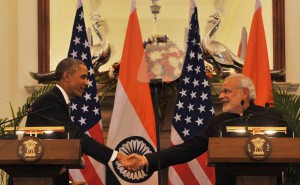 NEW YORK : In a sign of warm personal friendship, US President Barack Obama has written a profile for Prime Minister Narendra Modi for Time magazine as it named the Indian leader among the ‘100 Most Influential People in the World’.In the profile titled ‘India’s reformer-in-chief’, Mr Obama has described Mr Modi’s life story “from poverty to Prime Minister” as one that reflects the dynamism and potential of India’s rise.
“Today, he’s the leader of the world’s largest democracy, and his life story-from poverty to Prime Minister-reflects the dynamism and potential of India’s rise,” Mr Obama said.
“Determined to help more Indians follow in his path, he’s laid out an ambitious vision to reduce extreme poverty, improve education, empower women and girls and unleash India’s true economic potential while confronting climate change.”Like India, he transcends the ancient and the modern-a devotee of yoga who connects with Indian citizens on Twitter and imagines a ‘digital India’,” the US President wrote.
Mr Obama recalled Mr Modi’s visit to Washington last year when both the leaders visited the memorial to Dr Martin Luther King Junior, an American civil rights activist.”We reflected on the teachings of King and Gandhi and how the diversity of backgrounds and faiths in our countries is a strength we have to protect. Prime Minister Modi recognises that more than 1 billion Indians living and succeeding together can be an inspiring model for the world,” Mr Obama said.
Apart from Mr Modi, ICICI Chief Chanda Kochchar and Vikram Patel, co-founder of the NGO Sangath and the Centre for Global Mental Health at the London School of Hygiene and Tropical Medicine, have also been named to the annual list of the most influential people in the world “who are shaping the future.”