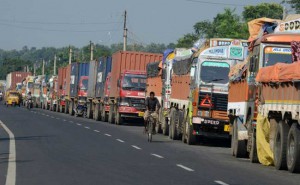 NEW DELHI: Over 4,000 trucks from India are stranded on the border with Nepal which is grappling with a deepening fuel crisis as protests over the country’s new Constitution have strangled essential supplies.
India has rejected as “totally false” allegations that that has imposed a blockade, saying it is the responsibility of the Nepal government to facilitate the entry of trucks.
“We can only take goods up to the border and beyond the border, it is the responsibility of the Nepalese side to ensure that there is adequate safety and security for the trucks to enter that side,” External Affairs Ministry Spokesperson Vikas Swarup said today.

Long lines of trucks, extending as far as 10 kilometres, have been stranded on the Indian side of the border for over five days now. The government says that the trucks are unable to proceed due to the disturbed security situation in the southern Terai region of Nepal.
But top leaders in Nepal have accused India of violating international laws by halting cross-border trade. “We are not getting fuel, cooking gas and vegetables from India and we don’t want such kind of friendship,” said KP Oli, chief of the ruling UML party, who is tipped to be the next prime minister.

As tensions with India have risen, there has been increased speculation in Kathmandu over whether fuel could be imported to Nepal from its other neighbour China. But Nepalese officials were quick to play down the reports. “There is no alternative to the road to India,” Prakash Adhikari, press advisor to Prime Minister Sushil Koirala told Reuters. “Getting petrol and petroleum products from mainland China is difficult due to the terrain.”
In capital Kathmandu, the government has begun rationing of petroleum products to tackle the fuel crisis. “Beginning on Thursday, we are further restricting distribution due to the very limited supplies we have. Private vehicles will not be able to purchase petrol or diesel,” said Laxmi Prasad Dhakal, a home ministry spokesman.
Emergency services vehicles, the army and police and trucks carrying food supplies would be exempted, and the rationing would be reviewed on Saturday, he said.
On Wednesday, trucks from India carrying essential goods and petroleum products started entering Nepal – about 100 cargo trucks entered the country from the Sunauli border in Uttar Pradesh.
Protesters, meanwhile, continue to block entry points in the southern part of the Nepal, said officials in the border town of Biratnagar.
The agitation in Nepal is being led by the Madhesis – Indian-origin inhabitants of the Terai region – who are opposed to the splitting of the Himalayan nation into seven provinces, mandated by the new Constitution.
At least 40 people have been killed in the last one month in clashes between the police and protesters.