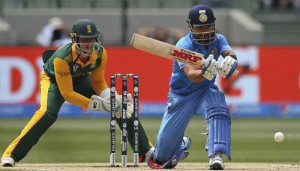 NEW DELHI: As India is set to host South Africa in a three-match T-20 series, starting Friday, it would be more of a country vs club duel between the players from both the sides.
With most of the South African players visiting India every year to take part in the most lucrative cricket league – Indian Premier League (IPL) – it’s certainly going to be an exhilarating battle on the cards.
South Africa have announced Faf du Plessis as their T-20 skipper, which means the dynamic cricketer would be making strategies against his Chennai Super Kings (CSK) skipper MS Dhoni, who will lead the home team.
Similarly, Virat Kohli, who loves watching team-mate AB de Villiers put the bowlers to sword during the IPL, will try to give Indian bowlers some useful tips when they bowl to the swashbuckling South African.
At the same time, Marchant de Lange would be up against Mumbai skipper Rohit Sharma, under whose captaincy the former won the cash-rich league this season.
With no hidden secrets and supreme respect for each other, the T-20 series is going to thrill the spectators as both the teams have quality players at their disposal to make it an intriguing battle.
It might also give the cricket fraternity a new angle while talking about the age-old debate of country vs club cricket.