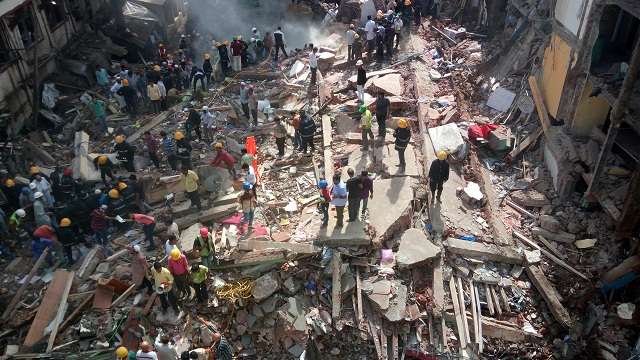 According to fire brigade sources present at the spot, “There were around nine families staying in the building. Thirty people are feared trapped.”The building is located at Pakmodia street near JJ Hospital, with 12 rooms and six godowns on the ground floor. Mumbai (MCGM) official said.

In 2013,  MHADA gave a no-objection certificate to the building for redevelopment and it was only now they received the letter of intent to start work.  Before that, the MHADA had sent a vacation notice as well, since the building was in a dilapidated Condition.

“This ground+6 building housed a total of 13 tenants which included 12 residential and 1 commercial. Out of these, the trust had already shifted 7 families in 2013-14. MHADA notices dated 28-03-2011 and 20-05-2011 declaring the building dilapidated were issued along with offer of transit accommodation to the remaining tenants and occupants,” the statement added.

The incident has occurred two days after the city received torrential rains, which is suspected to have damaged the building. In the heavy rains that brought Mumbai to a standstill on Tuesday, three people died in a landslide in Vikhroli’s Surya Nagar, one person was killed and two injured after a building collapsed in Vikhroli’s Varsha Nagar due to the rains in Mumbai.
An official said nine families were living in the old and dilapidated Arsiwala building on Maulana Shaukat Ali Road. The building housed a sweet shop warehouse on the ground floor; most families living on the higher floors were in their houses as the collapse happened early in the morning, officials said.

Police, however suspect that the heavy rains in the city could have weakened the building, which is located in city’s Dongri neighbourhood, an area full of narrow streets with closely packed buildings, some nearly a century old.