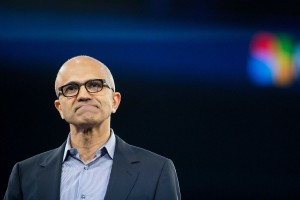 Microsoft’s India-born CEO Satya Nadella today outlined the technology giant’s vision to combine the power of human language with advanced machine intelligence as he announced new updates to the operating system Windows 10 to create more personal computing for every customer.
“As an industry, we are on the cusp of a new frontier that pairs the power of natural human language with advanced machine intelligence,” Nadella said in his keynote address to thousands of developers at Build 2016, its annual mega-gathering of developers that kicked-off today where the company presents its latest tools and technologies.
“At Microsoft, we call this Conversations as a Platform, and it builds on and extends the power of the Microsoft Azure, Office 365 and Windows platforms to empower developers everywhere,” Nadella said.
Nadella and executive vice president of Windows and Devices Group Terry Myerson outlined to the developers Microsoft’s strategy about the work it is doing to help them embrace the era of conversational intelligence and create more personal computing for every customer, industry and business.

This significant update will help you interact with your Windows 10 devices as naturally as you interact with the world around you using your pen, presence and voice,” Myerson said.
dnaTechLaunch, Microsoft Build 2016, developer conference, Windows 10, Cortana, Universal Apps, HoloLens”We are dedicated to making Windows the most productive development environment for all developers, with all-new capabilities for the Universal Windows Platform and all-new tools for bringing apps to Windows 10 from any platform.”

Speaking of Microsoft’s “more personal computing vision”, Nadella said Windows 10 “is off to an amazing start” with over 270 million active devices, outpacing Windows 7 by 145 percent. Customers have spent more time in Windows 10 than ever before over 75 billion hours since its launch eight months ago. The Windows 10 Anniversary Update features innovations for Windows Ink, Cortana, Windows Hello and gaming.
Microsoft introduced the ‘Cortana Intelligence Suite’, formerly known as the Cortana Analytics Suite, powered by research into big data, machine learning, perception, analytics and intelligent bots.
Built on Microsoft Azure, the company said these capabilities can be used by developers and businesses to create intelligent end-to-end solutions, including new apps that learn about the world around them and bots and agents that interact with people in personalised, intelligent ways.