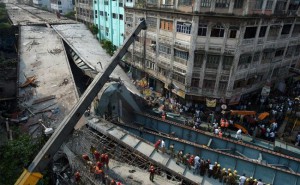 KOLKATA: In Kolkata, the death toll in yesterday’s flyover collapse tragedy has risen to 24 at Ganesh Talkies in Burrabazar area. The rescue work has been going on war footing.
Military and NDRF teams are using heavy earth movers and gas cutting paraphernalia to complete the operation as soon as possible but several more hours will be needed to clear the debris, one NDRF team member informed.

Talking to reporters at the accident site last night, Chief Minister Mamata Banerjee informed that there is no passenger bus trapped under the debris of the caved-in mangled mass of steel and concrete as was feared in early reports.
Camping for hours at the roadside with Wet Bengal Chief Secretary, Home Secretary and city Police chief at the accident site, Mr. Banerjee before leaving for the hospitals to see the injured, said, 35 of the rescued injured persons have been sent home after treatment. 12 of the identified bodies have been handed to family persons, she said.

Visiting Marwari Relief Society Hospital and Calcutta Medical College and Hospital just before midnight, Ms. Banerjee instructed the medical officials to take proper care of the injured. She informed that state will pay for treatment of all the injured including those being treated at Marwari relief society and other private hospitals.

Earlier, Ms. Banerjee announced Rs. 5 lakh compensation for each of the dead, Rs. 3 lakh for seriously injured and Rs. 1 lakh for other injuries. She has also urged Election Commission for permission to offer government jobs to one of the nearest family persons of the dead.

Official sources informed that FIRs against the construction company IVRC ltd at the local Posta and Jorasanko Police stations have been lodged. An enquiry committee headed by chief secretary has also been constituted. Police overnight sealed three offices of the Hyderabad-based construction company and a team of Kolkata Police left for Hyderabad.

State administration has constituted two high level inquiry panels to probe the tragedy. PM Narendra Modi last night rang up the chief minister. Expressing his condolences to the bereaved families, he enquired in detail about the tragedy and assured the chief minister of all help from the Centre.