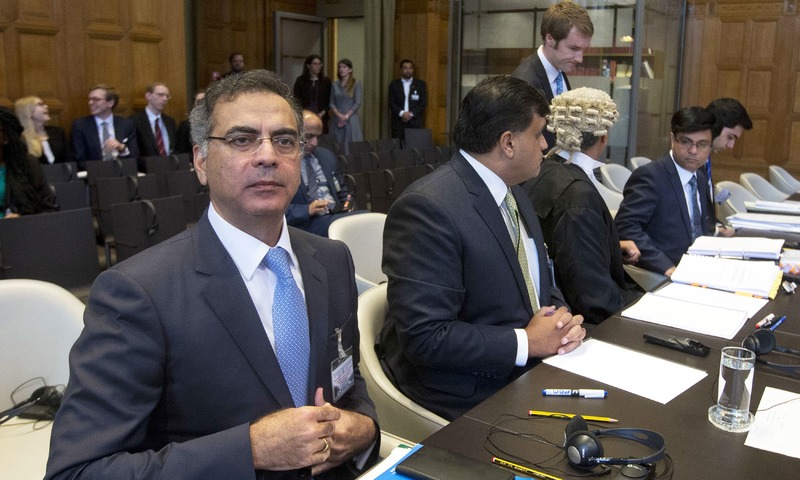 ISLAMABAD: The Nawaz Sharif government in Pakistan has come under severe attack from its citizen who are now questioning the strategy adopted by its lawyers and why it accepted the International Court’s jurisdiction in Kulbhushan Jadhav sentencing case.

Several legal experts from Pakistan have questioned the strategy adopted by the team of lawyers led by Khawar Qureshi and why they wasted the crucial 90-minutes given to them to argue the case at the ICJ.
The International Court of Justice (ICJ) ruling staying the execution of alleged Indian spy Kulbhushan Jadhav “has caused shock and disappointment in Pakistan”, a daily reported on Thursday.
Harish Salve – the chief architect of India’s victory at ICJ – says ‘public duty’ on charging just Rs 1 fee to argue Kulbhushan Jadhav case
Pakistan plans to change its team of lawyers, reports said today, a day after the International Court of Justice (ICJ) ordered the country to halt for now the death sentence of Indian Kulbhushan Jadhav. The ruling of UN’s top court has been viewed as a big win for India, which has accused Pakistan of violating an international treaty that guarantees rights of foreign convicts.

A new team of lawyers would present Islamabad’s position more effectively in the world court at The Hague, Pakistan’s Foreign Affairs Advisor Sartaj Aziz was quoted by media reports as saying today; he also commented that the counsel for Pakistan had “courageously” presented their stance earlier this week. The Nawaz Sharif government has come under attack from opposition leaders as well as experts, who allege that a weak case was put up by Pakistan’s lawyers.

In a decision that described as “unanimous and binding”, 11 judges at the UN court said yesterday that Pakistan should have provided India consular access to Mr Jadhav.Mr Jadhav, 46, was sentenced to death last month by a Pakistani military court on charges of “spying” and “terrorism”. The former Navy officer was arrested by Pakistan last year. New Delhi says that he was kidnapped from Iran, where he ran a business.
Pakistan argued before the ICJ that it does not have jurisdiction in the case as it was related to its national security; it also insisted that a person convicted of terrorism cannot be granted consular access. That argument was rejected by the court.

Pakistan’s Defence Minister Khawaja Asif told Pakistan Today that the issue of Mr Jadhav concerns the nation’s security and there will be no compromise on it. “ICJ has only granted formal stay on the death sentence of Jadhav,” he said.A Pakistan Bar Council executive member, Raheel Kamran Sheikh, was quoted as saying it was a “matter of concern” that the success rate of Pakistan in international arbitration cases was 2 per cent while India’s success rate was 60 per cent.

“We lost important cases at the international forum in the last couple of years. Likewise, we spent more than one billion rupees on lawyers’ fees in those cases,” Mr Sheikh said. He commented that the Jadhav case was a classic example of how in the power struggle between military and political institutions, gaps in the foreign policy and national security perspectives had grown.

A senior official in the law ministry was quoted as telling the Express Tribune that Pakistan’s lead lawyer Khawar Qureshi made two mistakes. “He did not nominate ad hoc judge before the hearing and he did not respond to the argument of Indian lawyer regarding the 2008 bilateral agreement between India and Pakistan on consular access,” he said.

“It`s Pakistan`s mistake to have appeared there. They shouldn`t have attended. They have shot themselves in the foot.”Until the ICJ gives its verdict, the case will go on in Pakistan,” he said, adding that Jadhav cannot be executed as long as the stay order is there.

“Pakistan had 90 minutes of argument time but we wasted 40 minutes,” Aslam told the Dawn.
After ICJ victory, India to seek annulment of Pakistan military court’s death sentence to Kulbhushan Jadhav “I was surprised why we finished our arguments in such little time. I think (lawyer) Khawar Qureshi didn`t consume all the time… I don`t think we presented the case quite well. “I think Pakistan was grossly unprepared,” he added.
Former Attorney General Irfan Qadir said he was shocked. “I think this decision is a violation of the principle of natural justice. I am shocked as to why Pakistan went there and presented their position and gave it in such a rush.”The lawyers handling these matters had no experience. The arguments had no weight. They should have been presented in a rational manner.”

Pakistan Peoples Party leader Sherry Rehman told Dawn: “We based our case on jurisdiction and it proved weak. More arguments should have been made regarding espionage.” Barrister Farogh A. Nasim said Pakistan should not have conceded to ICJ`s jurisdiction. “India did not give consent to the Kashmir issue going to ICJ, then why did Pakistan give consent to the Jadhav case?” he asked.
With IANS inputs