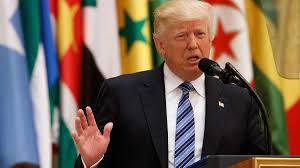 RIYADH : Urging Arab and Islamic leaders to unite and do their share to defeat Islamist extremists, US President Donald Trump acknowledged that India was a victim of terrorism. The US President made the comments while addressing the Arab Islamic American Summit in Riyadh yesterday.

President Trump named India among the countries that had suffered terror, as he addressed the Arab-Islamic-US summit. He said that countries must ensure that terror groups didn’t find sanctuary on their soil.”The nations of Europe have also endured unspeakable horror, so too have nations of Africa and South America, India, Russia, China, Australia have all been victims,” Mr Trump said.
Mr Trump was addressing the leaders of 50 Muslim-majority countries on Sunday afternoon in his first speech on foreign soil. America, he said, had suffered repeated barbaric attacks, from September 11 to the Boston bombings and the Orlando attack.
Without naming Pakistan, the US President said “every nation has an absolute duty to ensure that terrorists find no quarter on their soil.” During his speech at the Arab-Islamic-US summit, Trump acknowledged that India was a victim of terrorism and asked countries to ensure that terror groups don’t find sanctuaries on their soil.
The US President urged Arab and Islamic leaders to unite and do their share to defeat Islamist extremists, making an impassioned plea to “drive out” terrorists while toning down his own harsh rhetoric about Muslims. He assured full US cooperation in tackling the terrorism menace.

The US president did not use his signature term “radical Islamic terrorism” in the speech, a signal that he heeded advice to employ a more moderate tone in the region after using the phrase repeatedly as a presidential candidate. “Terrorism has spread all across the world. But the path to peace begins right here, on this ancient soil, in this sacred land,” Trump told leaders from about 50 Muslim-majority countries representing more than a billion people.
The President further pledged to work alongside the West Asian nations to combat extremist ideology in the region as all the countries from the US to India, Australia to Russia – have been “victim of terrorism and have suffered repeated barbaric attacks.”Without naming Pakistan, Trump said “every country must ensure that terrorists don’t find any sanctuary on their lands.”