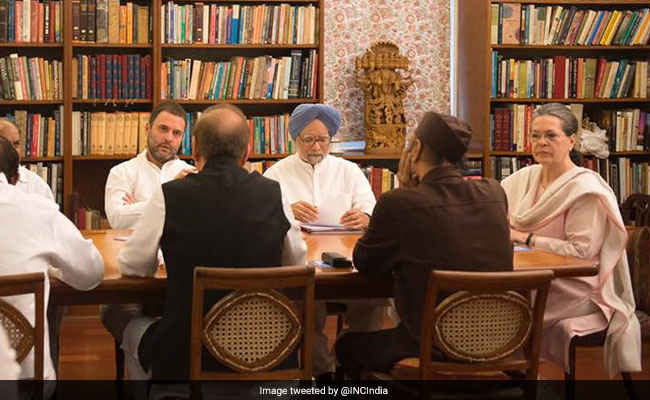 NEW DELHI : Congress president Sonia Gandhi on Tuesday lashed out at the Centre while addressing the closed-door Congress Working Committee (CWC) meeting. “We must be ready to protect the essence and idea of India which this government is seeking to extinguish,” said Sonia Gandhi.

During the three years of the NDA government, there has been a “brazen campaign to straitjacket the whole country into regressive and narrow-minded world view,” she said “We must be ready to protect the essence and idea of India which this government is seeking to extinguish”.

Speaking on the ongoing unrest in Kashmir, Gandhi said that earlier, there was relative calm in the Valley, but now there was growing confrontation, tension, and fear. The crisis in Jammu and Kashmir has come to represent the colossal failure of the government, she added at the CWC, the highest decision-making body of the Congress.

During the three years of the NDA government, there has been a “brazen campaign to straitjacket the whole country into regressive and narrow-minded world view,” she said. The meeting, chaired by Sonia Gandhi, was attended by party’s vice president Rahul Gandhi, former prime minister Manmohan Singh, former finance minister P Chidamabaram, Digvijaya Singh, Ghulam Nabi Azad and Ahmed Patel.
The upcoming presidential and vice presidential elections were briefly discussed as was Ms. Gandhi’s initiative on bringing opposition parties together on the issue.

It was decided that Kashmir was too important an issue for party members to speak in different voices. The party committee that was set up under former Prime Minister Dr. Manmohan Singh on Kashmir will formulate a position for the party.
Dr. Manmohan Singh who made an intervention on the economic situation, said that private sector investment has collapsed under the Modi government, that the ” economy is running on just one engine of public spending” and that ” the construction industry which is one of the largest employment generators in the country has suffered a contraction “. He pointed out that the most worrisome aspect was the negative impact on job creation.
(With inputs from PTI)