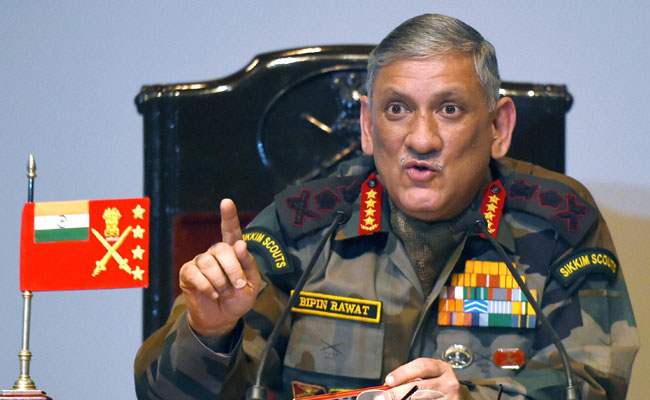 NEW DELHI : The Communist Party of India (Marxist) has attacked Army Chief General Bipin Rawat for supporting Major Leetul Gogoi, who had used a stone-pelter as a human shield in Kashmir. An editorial in party mouthpiece People’s Democracy also accused the Army Chief of “reflecting” the views of Modi government “which seeks to suppress the people of Kashmir.” Prakash Karat, CPI(M) Polit Bureau member is the editor of the newspaper.

Here’s the article published in People’s Democracy:“THE remarks made in an interview by the Army Chief of Staff, General Bipin Rawat, about dealing with civilian protestors in Kashmir exemplifies all that is wrong with the way the Modi government is dealing with the situation there.

Gen. Rawat stated in the interview that: “In fact, I wish these people instead of throwing stones at us, were firing weapons at us, then I would have been happy. Then I could do what I (want to do)”.He also defended the wrongful action of Major Nitin Gogoi who had tied a civilian in front of a jeep to act as a human shield and drove his convoy through a number of villages.

The army chief had given a commendation to the officer even while an enquiry into the action was being held.Gen. Rawat justified the serious violation committed by Major Gogoi in the following words: “This is a proxy war ….It is played in a dirty way….That is where innovation comes. You fight a dirty war with innovation”.
The way Farooq Ahmad Dar, who had gone to vote in the Srinagar by-poll, was caught and tied to a jeep as a deterrent to stone pelters was a shocking incident. The army chief of staff, by commending this act, has let down the high professional standards of the army. Some former serving generals of the army have decried the use of the civilian as a human shield. They have correctly pointed out that the army cannot treat its own people in such a manner.

Gen. Rawat makes no distinction between young protestors throwing stones and armed militants. He had, on an earlier occasion, warned that the army would treat all those who do not support army operations or obstruct them during encounters as “overground workers of terrorists”. To taunt protestors to take up arms, so that the army could deal with them appropriately is a needless provocation and displays an attitude which is unbecoming of a senior army officer.

Unfortunately, the army chief is reflecting the views of the Modi government which seeks to suppress the people of Kashmir, who are voicing their political protest, through the sole reliance on use of force. Not only the people of Kashmir but the army itself will suffer irreparable damage due to the government’s blind adherence to the use of coercive force against the civilian population.”