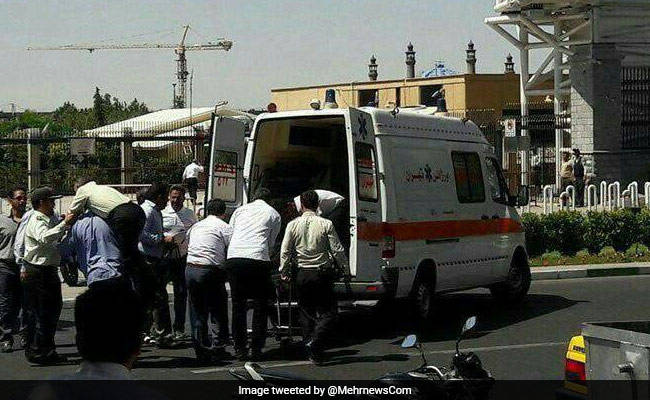 Press TV reports that bomber in shrine was reportedly a woman. She blew up herself outside the shrine on western yard.One of the Mausoleum attackers has reportedly killed himself by swallowing cyanide, reports Press TV. Mehr news agency reports that despite the attack, Parliament session is going on normally, broadcast live on national radio.

Shi’ite Iran has been singled out as a target by Sunni jihadists, including the Islamic State group, but has largely escaped attacks within its urban centres. Iran provides key ground forces against IS and other rebel groups in Syria and Iraq. ISNA reported that the shooters had been surrounded but had yet to be arrested.
There were conflicting reports from inside the Parliament complex, with some reports saying the situation had been brought under control while others said the shooting was continuing, with the buildings under lockdown.The mausoleum is in southern Tehran, around 20 kilometres (12 miles) from the Parliament building. An armed man had entered at the western entrance of the mausoleum and opened fire before blowing himself up with a suicide vest, the site`s head of public relations Ali Khalili told the IRNA news agency.
The ILNA news agency said five people had been injured and that security forces were dismantling a bomb inside the mausoleum. State TV said one of the attackers was killed by security guards and that a woman was arrested following today’s attack.Iran’s state TV news website says four “terrorists,” including a suicide bomber, have attacked the shrine in Tehran, killing a security guard and wounding four people.
An apparently coordinated attack took place at the mausoleum of Iranian revolutionary founder Ayatollah Ruhollah Khomeini, several news agencies said.As per news agencies ISNA and Fars, three people had been shot after the gunmen entered via the north entrance, including at least one security guard.A Member of Parliament told state broadcaster IRIB that there were four gunmen inside the parliamentary complex in central Tehran, armed with rifles and a pistol.