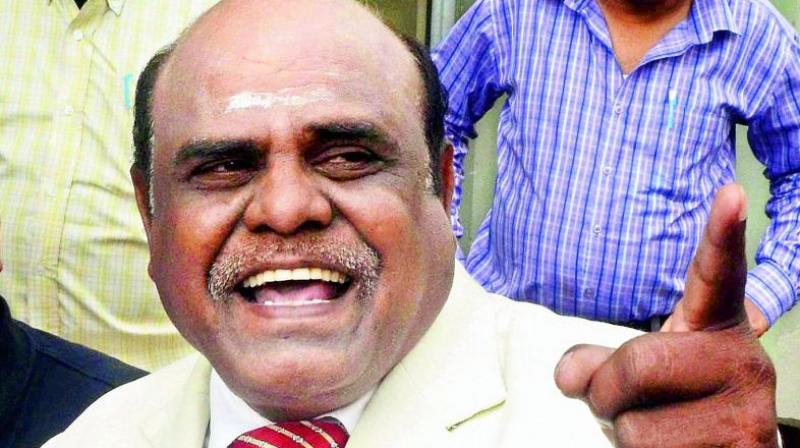 NEW DELHI : The Supreme Court on Tuesday held Calcutta High Court Judge C.S. Karnan guilty of contempt of court, judiciary and judicial process and sentenced him to six months imprisonment.Justice Karnan will be forthwith taken into custody.
“We are of the unanimous opinion that Justice C.S. Karnan has committed contempt of court, judiciary and judicial process of the gravest nature,” Chief Justice J.S. Khehar mentioned in the order.  The court also ordered media not to publish the content of orders passed by Justice Karnan.

Before announcing the first-ever jail sentence for a judge, the court rejected an argument around “the blemish” cast by sentencing a judge. He has to be seen as a citizen of India and not as a judge. There is no colour or no judge , we can’t distinguish the contempt , and not decide just on the fact that he is a sitting judge that we can’t take action against him,” the Chief Justice of India, JS Khehar, said.

On Monday Justice Karnan had issued an order sentencing eight Supreme Court judges to five years of “rigorous imprisonment” and imposed a fine of Rs. 1,00,000 each under the Scheduled Castes and the Scheduled Tribes (Prevention of Atrocities) Act of 1989 and the amended Act of 2015.The eight include members of the seven-judge Bench, headed by Justice Khehar which, in February, issued a contempt order against him on the charge of degrading the judiciary.

Meanwhile, Justice Karnan told CNN-News18 that the SC has no authority to pass an order and insisted that he would not surrender. On Monday, Justice Karnan “sentenced” Chief Justice of India JS Khehar and seven other judges of the Supreme Court to five years rigorous imprisonment after holding them guilty of harassing a “Dalit Judge” (him), with a “common intention”.

In January, Karnan wrote to Prime Minister Narendra Modi naming 20 “corrupt judges”, and seeking probe against them to curb “high corruption” in the Indian judiciary.The Supreme Court then issued him a contempt notice, an unprecedented step against a sitting judge. After he failed to appear, it on March 10, in another first time move, issued a bailable warrant against him.

But the judge escalated the row by ordering a Central Bureau of Investigation probe against the seven judges. Karnan appeared before the seven-judge bench on March 31, but renewed the confrontation on April 13, passing a “judicial order” against them for “violating” the SC/ST Act and also asked them to appear before him. Later, he directed the Air Control Authority in New Delhi not to allow the CJI and other six judges to travel abroad.
The Supreme Court asked him to undergo a medical test on May 04, but Karnan not only refused to comply, but also hit back by directing Delhi Police to conduct a psychiatric test of the seven judges.
As the Supreme Court transferred him from the Madras High Court to Kolkata, Justice Karnan said he was being victimised because he is a Dalit.
The defiant judge refused to show up in the top court or submit to its orders. Instead, he fell into a routine of matching every Supreme Court order with one of his own, pronounced at his “home court”.
At a hearing on March 31, the Chief Justice had raised questions about the judge’s mental health.
Justice Karnan will be forthwith taken into custody.
(With Agency inputs)