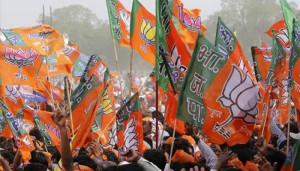 MUMBAI: As both Shiv Sena and Nationalist Congress Party (NCP) eagerly await Bharatiya Janata Party’s invitation to form a government in Maharashtra, reports on Tuesday claimed that the BJP is likely to take support of 12 Independents.
Reports came after Home Minister Rajnath Singh and BJP general secretary JP Nadda postponed their Maharashtra visit after Diwali. Both the BJP leaders were scheduled to go to Maharashtra today to discuss the issue of government formation.The BJP held hectic consultations on Monday in this regard with party leaders weighing various factors to decide on the chief ministerial candidates.
The BJP has many reasons to give its erstwhile ally a snub, as Shiv Sena had viciously targetted Prime Minister Narendra Modi during poll campaign.As far as NCP is concerned, BJP is most unlikely to take risk in allying with the Sharad Pawar-led party. During the election campaign, PM Modi had described NCP as the “Naturally Corrupt Party” and urged voters to reject it.Also, with Delhi and Jammu and Kashmir elections in hindsight, the Modi-led BJP would not take the risk of partnering with NCP, which “extorts money”.
While the NCP has offered to extend outside support to the BJP without any pre-conditions, Shiv Sena led by Uddhav Thackeray wants the BJP to approach it first.The BJP emerged as the single-largest party in Maharashtra, winning 122 seats in the 288-member Assembly. Shiv Sena won 63 seats, Congress 42, NCP 41, MNS 1 and Others 19.
The vote share of BJP in Maharashtra Assembly Elections doubled compared to that in 2009 to help catapult its tally from 46 to 122 seats in a five-cornered contest and it was also marginally higher than it got in the May Lok Sabha polls.
The BJP’s vote share in the just concluded polls was 27.8 percent that saw it emerge as the single largest party compared to 14.02 percent in 2009, according to Election Commission data. The BJP on its own was 23 seats short of a majority in an election marked by neck-and-neck contests.