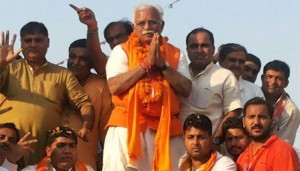 NEW DELHI : fter much deliberation, former Rashtriya Swayamsevak Sangh member Manohar Lal Khattar was on Tuesday elected as Haryana’s new Chief Minister.Having got a majority on its own for the first time in Haryana, the BJP legislative party meeting concluded here after electing Khattar as legislature party leader.Khattar is the first non-Jat Chief Minister of Haryana in 18 years.
“I have been chosen by the party legislators and the BJP leadership for this responsibility. I can assure you that we will work for the welfare of the people of Haryana,” Khattar said after being elected the leader of the BJP legislative group.“My government will be transparent and there will be no discrimination with any area,” Khattar, sporting a light blue jacket, told media persons.
Later, talking to Reporters, Khattar said it was PM Narendra Modi’s vision that helped the party in winning Assembly Elections. The BJP leaders have met Haryana Governor Kaptan Singh Solanki and requested him to invite to form the next government, he said.

Khattar also expressed gratitude towards those who helped party win polls in the state for the first time.The swearing-in of the new chief minister and other ministers is likely to take place on October 26. The ceremony could take place at a sports stadium in Panchkula town, 15 km from here, instead of the Haryana Raj Bhavan here.The 60-year-old Khattar, a new face in electoral politics, was fielded from Karnal Assembly seat from where Prime Minister Narendra Modi launched his poll campaign in the state.
A first-time MLA, Khattar has no administrative experience, but he is stated to have been a good RSS organiser for the past 40 years. He won Karnal seat by 63,736 votes.Khattar, a Punjabi by origin, is stated to be close to Prime Minister Modi and BJP chief Amit Shah.The meeting was attended by Parliamentary Affairs Minister Venkaiah Naidu and party vice president Dinesh Sharma, appointed observers by the BJP’s Parliamentary Board for deciding the name of Haryana Chief Minister.
All newly-elected 47 BJP legislators, the central observers and other senior Haryana BJP leaders attended the meeting.Opinion of all the legislators was taken before finalising Khattar for the top job.Since its creation, the state has been mostly ruled by members of pre-dominant Jat community including Bansi Lal (four times), Devi Lal (twice) and his son Om Parkash Chautala (five times), Hukam Singh (once) and Bhupinder Singh Hooda (twice).
Non-Jat Chief Ministers include Bhagwat Dayal Sharma (once), Rao Birendar Singh (once), Banarsi Dass Gupta (twice) and Bhajan Lal (thrice).Besides Khattar, other names doing rounds for the chief minister’s post were those of state BJP president Ram Bilas Sharma, state BJP spokesperson Abhimanyu, senior legislator Anil Vij and BJP Kisan Cell leader OP Dhankar from among the recently elected legislators.
Other names being mentioned were of union Ministers Sushma Swaraj, Rao Inderjit Singh and Krishan Pal. The name of Congressman-turned-BJP leader Birender Singh also figured in the speculation. This is the first time that the BJP will form its own government in the state. The party had won only four Assembly seats in the 2009 polls.
Results of the Haryana Assembly Elections were historic for the BJP as the party romped home with 47 legislators. The Indian National Lok Dal (INLD) followed with 19 legislators while the Congress, which was in power since March 2005, managed to get only 15 seats. Two seats went to the Haryana Janhit Congress (HJC), one each to Shiromani Akali Dal and Bahujan Samaj Party (BSP). Five independent candidates were also elected.