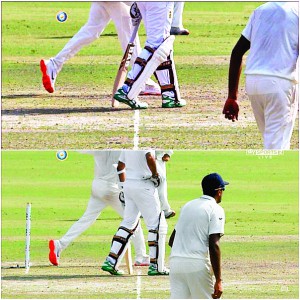 MUMBAI: For any visiting cricket team, playing Test cricket in the sub-continent is always challenging. It becomes even more so when India object to Decision Review System (DRS), citing less than 100 per cent accuracy.
Having taken such a hard stand against DRS, it has always been expected from the Board of Control for Cricket in India (BCCI) to ensure that the game is played in the fairest of manners on home grounds.
However, when Ravindra Jadeja had AB de Villiers caught at slip in the 45th over of the South African innings on Friday, with the batsman on seven, the third umpire’s decision could have created a huge controversy, courtesy the callousness of the host broadcaster.

The on-field umpire Kumar Dharmasena, after giving De Villiers out, checked with the third umpire, Vineet Kulkarni, to see where Jadeja’s front foot landed. It was a safety measure to check if the bowler had bowled a No Ball.
But what happened in the next two minutes was just shocking. The third umpire was trying to check Jadeja’s front foot – whether it was within the legitimate limits – as the official broadcaster played out replays to facilitate the TV umpire with different angle views.

The first replay clearly showed that Jadeja bowled a No Ball, the first one of his 12-Test long career – and De Villiers was not walking back to the pavilion. The other angles were not clear till a slide was played to suggest that Jadeja’s front foot had landed well inside the front crease.
During that No Ball deliberation, the official broadcaster showed two different replays of two different deliveries to the TV umpire. The entire crowd got off to their feet on seeing the later video replay on IS Bindra Stadium’s giant screen. Fortunately, the mistake was corrected soon and the right decision was made by Kulkarni.

This was not the first such mistake by official broadcasters. If one can remembers the July 2011 incident in Jamaica, West Indies, India skipper MS Dhoni was wrongly dismissed off a No Ball in the first innings of the second Test as an incorrect replay was shown to the third umpire. The ICC had confirmed the error by the host broadcaster and also apologised for the error.
Fortunately for BCCI, the third umpire realised the mistake well in time to save the BCCI and its official broadcaster the blushes. Had he not been wise enough to judge this error, South African innings could well have ended much earlier than this 17-run deficit.

BCCI has, of late, barred news television channels from official press conferences by citing broadcasting rights and in the name of feeding lesser known channels (about 650 by its own estimate) of smaller cities.
However, the free hand to the official broadcaster, too, needs to be checked to save the BCCI’s image. There has to be a counter-check on BCCI’s own broadcaster to avoid such embarrassing situations of showing wrong replays.
No one has ever questioned BCCI’s, or for that matter any other cricket board’s, decision to make money by selling live coverage rights but television journalists who have been instrumental in making this game popular have become victim of BCCI’s hunger for money.
Does BCCI think that by killing the ‘golden goose for some extra money’ can actually serve any purpose. Imagine a scenario where there is no one inside the stadiums to question the BCCI on any of its mistakes, from showing wrong replays to Gurunath Meiyappan’s presence in any team assembly?
Hope the new regime wakes up to this very real threat posed by these new BCCI advisers who were earlier managing players but now have been taken responsibility to manage the media.