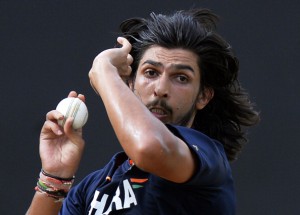 NEW DELHI: Ishant Sharma understands the frustration of speed breakers constantly obstructing a smooth ride. For, every time his career seems to gather pace, it hits a roadblock in the form of injuries.

While India played 44 international matches (12 Tests, 30 ODIs and 2 T20Is) between June 2014 and March 2015, the 26-year-old lanky pacer from Delhi managed to play in only 10 of those outings, courtesy his frequent breakdowns.
The latest was a knee injury which sent him back home from Australia days before the World Cup kicked off in February.
Now, fit and raring to go in the Indian Premier League-8, Ishant, in a candid chat with mid-day yesterday, opened up on coping with the disappointment after missing out on his maiden World Cup berth, his plans as far as managing workload is concerned and why he thinks Sunrisers Hyderabad have the best pace attack of all IPL teams.
Excerpts:
On missing the World Cup:
It was very difficult to accept, but at some stage you had to accept it. In 2011, I did not get picked in the World Cup squad. In 2015, I had a good chance. I was in the team and everything was going well for me but I still had to miss it because of the (knee) injury. It was tough to accept. The support staff and Mahibhai (MS Dhoni) handled me very well at a time when I was emotionally down. You want to be a part of such a team.If captains like Mahibhai tell you that you have to jump from the 24th floor, you would readily do that without thinking even once. Mahibhai helped me a great deal to cope with the disappointment.
On the frequency of injuries:
Sometimes it is, but honestly, I can’t do much about it. I am doing whatever I have to do… I am training regularly; I’m disciplined to become a successful bowler. There are a few things one cannot control. I know what to do to avoid injuries – to train hard which I have been doing. Nobody likes getting injured, but some things you cannot control, so no point worrying about them.
On managing the workload:
I love bowling. Even when I am not playing a match, I keep bowling… I keep practising. Now, every physio has told me to monitor my workload. I have been told not to bowl more than 10 overs in a day, but I have been bowling more than that. It is something I cannot control. I know I have to keep a tab on my workload to avoid getting injured frequently. I am just 26. I don’t think I need to cut down on any cricket.
On whether he is rushing his return:
I am not rushing my return. I gave a proper fitness test at the NCA (National Cricket Academy, Bangalore) and after getting all clearance, I decided to play in the IPL. If I am not fit then I will not cause any disadvantage to my team to a point where they say, ‘look, he is not fit, but he’s still playing’. I am not one to play despite injury. If I can miss the World Cup then I can surely miss the IPL as well. Nothing is bigger than the World Cup.
On experts, who believe T20 cricket is hampering him:
Everyone is entitled to a view. Maybe, these experts think like this because they never played Twenty20 during their time. For me, whatever you get from cricket, we should respect it and play instead of saying, ‘T20 is stealing cricket’. No point in saying all these things. Whatever is happening, it is for the betterment of players.

On coming back after a two-month injury lay-off:

It all depends on your mind. If you are confident, it doesn’t matter whether you have played matches or not. I am pretty sure about myself – that I am fit enough to play any form of the game. I am pretty happy with my bowling.
On his IPL-8 goals:
I don’t set any goals because you tend to put pressure on yourself. It is better to play according to the situation. I have been playing for so many years now, so I know what to change and what I need to do in certain situations.
On Hyderabad’s strong bowling attack:
We have the best pace attack, no doubt about it. Adding Trent Boult, PK (Praveen Kumar) gives us more options. Everybody knows what a Dale Steyn and Bhuvi (Bhuvneshwar Kumar) can do. I am pretty sure we will do well in this IPL. Bhuvi is also bowling well in the nets. He played one match in the World Cup, but the wickets did not suit his bowling in Australia. I am sure he will get help from the conditions here.
On missing Kevin Pietersen for the league matches:
Everyone will miss someone like KP. He was not with us for the first two years, but we still managed to win matches. In the end, that is what matters. In (Eoin) Morgan, (Ravi) Bopara, we now have more options in the batting than last year.