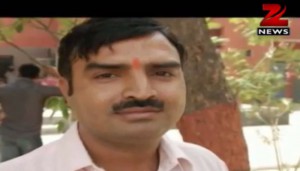 NEW DELHI : Once a ‘dead’ man, Aam Aadmi Party (AAP) member and Right to Information (RTI) activist Chandra Mohan Sharma in now very much alive and an accused in a murder case. Sharma and his girlfriend were arrested from Bangalore on Tuesday, and the RTI activist was produced before the media on Thursday.
He has been booked under various sections of the Indian Penal Code, including murder of a mentally-unstable man. Police said Sharma had faked his death as he was not happy with his married life and wanted to live with his girlfriend. Related Stories ‘Dead’ AAP activist Chandra Mohan Sharma is alive! AAP activist Chandra Mohan Sharma arrested Sharma had been presumed dead in a car-blaze on the Noida-Greater Noida Expressway on May 2 earlier this year. At that time, Sharma’s wife Savita had claimed that her husband – a resident of P-38 Alpha II, Greater Noida – was murdered by goons against whom he had raised issues through the RTI.
The police had investigated the case on the basis of Savita’s complaint and found during the probe that a girl from the locality had also gone missing some days later after Sharma’s ‘death’. The police, after putting the girl’s mobile phone number on tracker, found that the same was active in Bangalore. The Noida police than dispatched three teams to Bangalore where the two were found living together.
The duo were then arrested and brought back to Delhi on Thursday. Revealing further details, the police said Sharma had taken help from his brother-in-law to fake his death. Sharma, who was an employee at Honda Siel, told police that he was unhappy with his family life and decided to fake his death in order to assume a different identity and start living with his girlfriend from the neighbourhood – an unmarried woman.
Related Videos ‘Dead’ AAP activist Chandra Mohan Sharma caught alive! Sharma had narrated his family problems to his brother-in-law Videsh and told him that if his death was staged, Savita would get a job at Honda Siel and money from insurance policies that he had, Noida SSP Preetinder Singh was quoted as saying by leading English daily. “Sharma found a mentally-unstable man who used to roam in the same area and became friendly with the man. On May 1, the 38-year-old bought three litres of petrol.
He took the unidentified man to the car and, with Videsh’s help, strangulated the man using a belt. The dead man was then put on the driver’s seat before setting the car on fire,” Singh said further. The AAP member then left for Bangalore in a train. However, after living in Bangalore with the woman for a few days Sharma realised that he was unable to fulfil his daily needs. He then thrice called the girl’s family from a PCO between August 9 and 13 saying the missing woman had been spotted near Tirupati and that they should take her back.
“Three police teams were sent to Bangalore who found out that a man in Honda uniform had made the calls. CCTV footage provided the man’s photo. When we scanned the database of the nearest Honda plant, we found that a man identical to Sharma was working there,” said Singh. The suspected man identified himself as Nitin Sharma, claiming he was from Hisar in Haryana but the police nailed the lie after discovering a tattoo on his hand with his wife’s name.