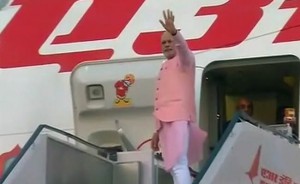 NEW DELHI : Prime Minister Narendra Modi left for Japan Saturday morning on his maiden bilateral visit outside the Indian subcontinent, which is expected to open new vistas in the bilateral ties and take the Strategic and Global Partnership to a higher level.Modi and his entourage will touch down at Kyoto airport. In a special gesture, Japanese Prime Minister Shinzo Abe will fly to Kyoto to receive Modi there.
The PM is visiting Kyoto the ‘smart city’ of Japan, to see the experiment there considering that he intends to build 100 smart cities in India.Modi and Abe will have substantive summit meeting in Tokyo on September 1 during which the two sides will look at ways to take the Strategic and Global Partnership forward.Cooperation in the fields of defence, civil nuclear, infrastructure development and rare earth materials is expected to top the agenda of the discussions.
Some agreements, including in defence and civil nuclear sectors, are expected to be signed. Among the agreements to be signed is one on joint production of rare earth materials.India is hoping to win Japanese backing for a nuclear energy pact and lure investment into its USD 85 billion market while addressing Japan’s concern about doing business with a nuclear-armed country
India has been pushing for an agreement with Japan on the lines of a 2008 deal with the United States under which India was allowed to import US nuclear fuel and technology without giving up its military nuclear programme.But Japan wants explicit Indian guarantees not to conduct nuclear tests and more intrusive inspections of its nuclear facilities to ensure that spent fuel is not diverted to make bombs.India, which sees its weapons as a deterrent against nuclear-armed neighbours China and Pakistan, has sought to meet Japan’s concerns and over the past month the two sides have speeded up negotiations ahead of PM Modi’s visit.
“I am keenly looking forward to my visit to Japan at the invitation of my good friend, Prime Minister Shinzo Abe, for the annual summit between India and Japan,” Modi said in his pre-departure statement.Noting that this will be his first bilateral visit outside the immediate neighbourhood as Prime Minister, he said it underlines “the high priority” that Japan receives in India’s foreign and economic policies.