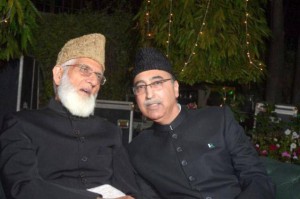 NEW DELHI: The request of hardline Hurriyat leader Syed Ali Shah Geelani for passport will be processed on “merit” depending on completion of “formalities” by him, the Union Home Ministry said on Thursday, amid a row over the issue that has divided the ruling coalition partners People’s Democratic Party and Bharatiya Janata Party in Jammu and Kashmir.
“Passport is the right of every Indian citizen and is issued by the Ministry of External Affairs after following due process. In case any applicant applies for the passport, he should fulfil all the formalities before his case is processed. As and when the matter is referred to the Ministry of Home Affairs, we will process the case on merit,” a Home Ministry spokesperson said.The PDP and the BJP are sharply divided over the Geelani passport issue.
The PDP has said it would approach the Centre for giving passport to Mr. Geelani on “humanitarian” grounds while the BJP has said he should not be given the travel document till he “apologises” for his anti-national activities.Sources said Mr. Geelani and his family members want to travel to Jeddah and have applied for passports online.
But he has not yet visited the regional passport office in Srinagar to give his biometric data and clicking the photograph. As per the new rules, an applicant must visit the passport office in person to give biometric details and click the photograph.Sources said after Mr. Geelani visits the passport office to complete the formalities, his application will be sent to the Ministries of Home and External Affairs for their comments as he falls in ‘prior security clearance’ category for issuing of a passport.
The Ministries, then, in consultation with the Jammu and Kashmir government, would take a final decision on granting the passport to him.Meanwhile, Minister of State for Home Kiren Rijiju blamed Congress for “unnecessarily” playing politics over Mr. Geelani’s passport issue.
“We have not taken any decision on the issue. When we take a decision, the whole country will know. The Congress is just unnecessarily playing politics on the issue. It is not good in national interest,” he said.Mr. Geelani was issued passport in 2007, 2008 and 2011 with a validity of one year in each time.