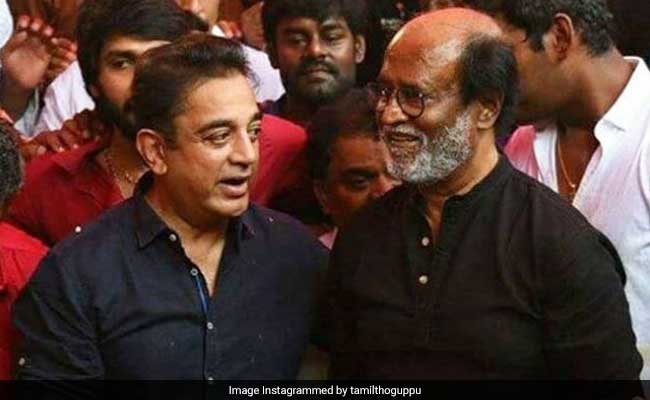 CHENNAI/ NEW DELHI : Despite superstar Rajinikanth’s continuing efforts to dodge support to any political organisation, the actor on Friday pledged “full support” to Prime Minister Narendra Modi’s ‘Swachhta Hi Seva’ campaign. Rajinikanth’s tweet came hours after fellow actor Kamal Haasan actually said he would like to be Chief Minister, “if required, even though it is a crown of thorns”.

Politics is swirling around Rajinikanth and Kamal Haasan, both adored as legends, but both with distinctly different styles that could extend to their political appeal. Kamal Haasan’s fans call him a class actor and while Rajinikanth has mass following. Born in Ramanathapuram, Kamal Haasan is largely seen as Tamil; Rajinikanth’s Karnataka origin is a red flag for some though fans argue that even former Chief Minister J Jayalalithaa was from Bengaluru.

Both Rajinikanth and Kamal Haasan have distinctly different styles that could extend to their political appeal.  Rajinikanth’s popularity with voters in the state is tested, unlike that of Kamal Haasan. With Rajinikanth’s support – and his famous comment that even God couldn’t save Tamil Nadu if Jayalalithaa

On several occasions has the Tamil superstar hinted at joining politics but never coming clear on his political ambitions. In the only clear statement of him taking the political plunge the Tamil actor had said in May, “If it’s God’s will, I will join politics.” He had also asked his followers to be “ready for war”, adding that the “system is rotten” and needs to be changed.

AIADMK and the Tamil Nadu government has been faced with crisis and a huge vacuum since the demise of late Chief Minister Jayalalithaa in December 2016.  In an earlier interview with CNN-News18, Union minister Nitin Gadkari had said that Rajinikanth is more than welcome to join the BJP.

He had said in May that whenever the superstar decides to join the bandwagon, he should definitely think of joining BJP. Also, RSS ideologue S Gurumurthy had earlier told “Rajinikanth may enter politics and form his own political party. In that case he might also form an alliance with the BJP.”

On the other hand, actor Kamal Haasan has made his political intentions very clear over the past few days. Apart from being very critical of the Tamil Nadu government, he said that he was thinking of launching a political party, out of compulsion and not choice.

Rajinikanth’s support – and his famous comment that even God couldn’t save Tamil Nadu if Jayalalithaa came back – the DMK swept the state polls in 1996. Months after Jayalalithaa, a former film star, died in office, the two superstars are vying for the spot she left vacant. Some see it as an extension of their silver screen rivalry in a state where many top politicians were film stars first, including Jayalalithaa and her mentor MGR or MG Ramachandran.

While Kamal Haasan calls himself an atheist and rationalist, and declares that his colour is not saffron, Rajinikanth’s spiritual leaning is seen to complement the BJP ethos. Haasan is outspoken while Rajinikanth is reticent, even self-effacing. Kamal Haasan is at ease spouting Tamizh illakiyam (Tamil Literature) as much as John Milton and Shakespeare.

Rajinikanth doesn’t speak much. But when he does, fans hang onto every word, interpret every nuance and quote him on various platforms as though it is gospel. Unlike Rajinikanth’s ambiguous statements, Kamal Haasan has been clear about his political debut. But Rajnikanth’s tweet today was seen as a message that he’s still in the reckoning.

In May, he had told his fans he’d call them when there’s a war. When he meets them again next month, a political announcement will be greatly anticipated. The two actors have shared screen space in some iconic films in the 1970s, very often with Kamal Haasan playing the straight-laced hero and Rajinikanth the stylish villain with shades of grey.
Kamal Haasan has said they are willing to act together again, but on the political stage this time. There is no villain here. The only dispute could be on who will be the star and who will direct. (With Inputs from Delhi ).