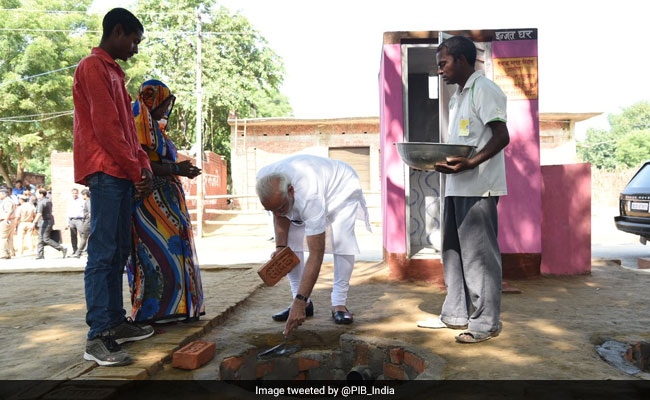 VARANASI : Addressing farmers on Day 2 of his Varanasi visit, PM Narendra Modi has promised “homes for all by 2022” and pitched for a clean and new India. The PM’s packed schedule for the day started with the inauguration of a sanitation drive and a ‘Pashu Arogya Mela’ in Shahanshahpur on the outskirts of Varanasi, his Lok Sabha constituency. The PM also handed loan waiver and housing scheme certificates to beneficiaries.
Referring to his government’s cleanliness drive, PM Modi said toilets at home can save up to Rs 50,000 per annum as per a survey. Praising villagers, where he went for laying foundation of a toilet for naming it as “Izzatghar”, Modi said, “I liked this word so much. Where there is Izzatghar, there is honour of our mothers and sisters. I also congratulate the state government for recognising it as Izzatghar. In the days to come those who are concerned about their honour, will construct Izzatghar.”

Going forward with his “Clean India” message, PM Modi said he is happy to have got the “opportunity to help in construction of toilets for the poor” and said, “Swachhata is puja for me. Cleanliness is a way to serve the poor of India.” He also encouraged all to keep their surroundings clean.

Modi added the government’s resolution was to double the farmer’s income and ensure even the poorest of the poor have a home to live in by 2022 when the country celebrates 75th year of independence. . “There are crores of families in our nation which don’t have a roof above their heads.

It is our responsibility that the poorest of the poor have a home to live in. So we have taken the responsibility that by 2022, we will build homes for everyone who doesn’t have one now, be it in cities or in villages.” We are aiming at changing the lives of the poor, middle class families. We’re taking up schemes to uplift the middle class, as they are the ones who’ll help the nation progress: PM Modi

Taking a dig at the previous Samajwadi Party government in Uttar Pradesh, Modi said it had no interest in building homes for the poor. “We used to write them letters after letters to submit a list of homeless so we could create a scheme for them. But the last government was not interested in building homes for the poor. After putting a lot of pressure on them, they submitted a list of 10,000 names,” Modi said.

The Prime Minister also launched a postage stamp based on ‘Ramayana’ in Varanasi and said that stamps are a wonderful way to preserve history. “Stamps have a special place in society. They are a wonderful way to preserve our history,” he said. “There have been many stamps on Lord Ram, but this is the first of its kind stamp, which depicts different aspects of his life. This has not been done in the past. I am happy that I have got the opportunity to do this from the holy soil of Manas,” he said.