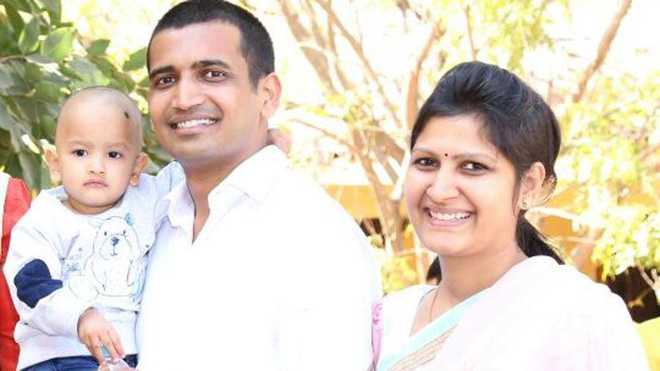 AHMADABAD : The Gujarat child rights panel yesterday sought a report from the civil administration and the police about steps taken by a Jain couple, who are embracing monkhood today, to secure their three-year-old daughter’s future.
The Madhya Pradesh-based Jain couple — Sumit Rathore and his wife Anamika — had last week announced their decision to become monks under the Shwetambar (white-clad) order of their religion and leave behind their daughter and renounce property “worth Rs. 100 crore”.

The deeksha (initiation) ceremony will take place at Surat under Sadhumargi Jain Acharya Ramlal Maharaj, their family members said in Surat yesterday. However, concerned about the future of the couple’s child, a person had recently filed a query under the Right to Information Act with the Gujarat State Commission for Protection of Child Rights (GSCPCR), its chairperson Jagruti Pandya said.

“Through the RTI application, a person sought to know from us what will happen to the child if the couple become monks,” she said. Since the ceremony is being held in Surat, the police commissioner and the collector have been asked to find out what steps the couple have taken for their daughter’s future and give a report to the GSCPCR, Jagruti Pandya said.
hile most of the couple’s family members who have arrived in Surat remained tight-lipped about the fate of the child, some others told reporters that the couple’s family members will take care of the child. Anamika’s father Ashok Chandaliya, former Neemuch district president of the BJP, had last week said he would take care of his granddaughter. “I am not against my daughter Anamika becoming a nun,” he had said.
Sumit’s father Rajendra Singh, who runs a factory that makes gunny bags for packaging cement, had also echoed a similar view. Sumit had worked in London before managing his family business in Neemuch while his engineer wife Anamika was earlier employed with a mining major. They are married for four years.
Sumit’s cousin Sandip Rathore had earlier claimed that Sumit owns properties “running into Rs. 100 crore”. Earlier this year, a Jain teenage boy from Gujarat, who had scored 99.99 percentile in Class 12 Commerce examination, took the vow of monkhood.
Meanwhile , days before a wealthy Jain couple from Madhya Pradesh takes monkhood vows, an activist has sought the intervention of the National Human Rights Commission to stop the initiation ceremony in the interest of their minor daughter. Sumit Rathore (35) and his wife Anamika (34) recently announced their decision to leave behind their three-year-old daughter and renounce property “worth Rs 100 crore” to become monks under the ‘Shwetambar’ (white-clad) order of their religion.

Sumit had worked in London before managing his family business in Neemuch while his engineer wife Anamika was earlier employed with a mining major. Kapil Shukla, a Neemuch-based social activist, said he has petitioned the National Human Rights Commission (NHRC), MP Human Rights Commission (MPHRC), office of state chief minister, the district collector and superintendent of police to stop the “deeksha” (initiation) ceremony of the couple, who will be inducted into the ‘Shwetambar’ order by Sudhamargi Jain Acharya Ramlal Maharaj in Surat on September 23.

Shukla contended that the couple’s decision was against the interest of their minor daughter. “Who will look after her? The Jain community should also come forward to stop the ceremony,” he told reporters today. (With inputs agencies).