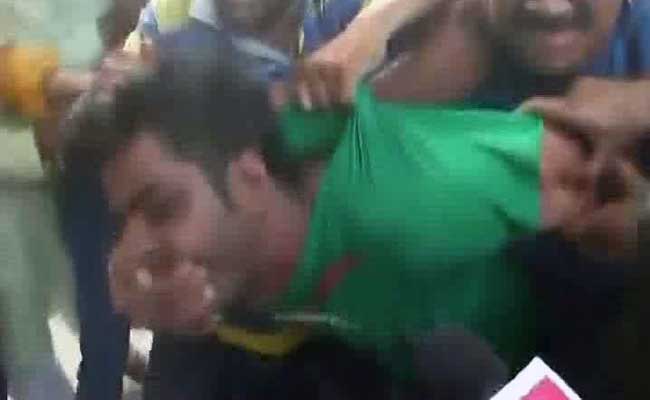 NEW DELHI : Kapil Mishra, sacked as minister after he accused Delhi Chief Minister Arvind Kejriwal of corruption, was attacked on Wednesday evening while on a hunger strike at his residence in Delhi’s Civil Lines. The attacker, a man named Ankit Bharadwaj, walked up to Mr Mishra and slapped him several times before he was stopped by the former minister’s supporters. Mr Bharadwaj was arrested and later released on bail.
Mr Mishra’s team claimed that Mr Bharadwaj has identified himself as a supporter of Arvind Kejriwal’s Aam Aadmi Party. But AAP has alleged that Mr Bharadwaj is a member of a BJP youth wing. “He is part of the Bharatiya Yuva Morcha…We don’t support violence of any kind,” said AAP leader Sanjay singh.

Kapil Mishra was suspended by AAP on Monday evening. This morning he began the hunger strike demanding that AAP reveal details of foreign trips made by five of its top leaders. He spent all day under a tent pitched near what served as his office till days ago, with a garlanded photograph of Mahatma Gandhi behind him; he has 60 days to vacate the government bungalow, allotted to him as a minister.

Mr Mishra was lying down surrounded by about a dozen supporters, when Ankit Bharadwaj attacked him.  The former minister has called his protest a satyagraha or “peaceful agitation” and said he will survive on water till Mr Kejriwal makes the details he wants public. “Arvind Kejriwal taught me to stand for the truth, protest and demand answers and I am simply following his advice,” he told.

Mr Mishra has in a public letter to Mr Kejriwal named the five leaders – including a minister Satyendar Jain and senior leaders Ashish Khetan and Sanjay Singh – whose trips he wants investigated. “Some people say that all allegations about money laundering and donations will be settled if these details are revealed…You have said the party doesn’t have money to fight elections…Show where all the money for foreign trips comes from and prove me wrong,” Mr Mishra said, asserting that once the details are revealed, “The Chief Minister will be forced to resign.”
He also alleged that he received a phone call from abroad threatening to “shoot me.”The Aam Aadmi Party has rubbished what it calls Mr Mishra’s “wild and baseless allegations.” Yesterday, Kapil Mishra went to the Central Bureau of Investigation or CBI with large yellow envelopes that he said contained proof of his allegations against AAP and Mr Kejriwal.
He said the envelopes contained his statements, but did not clarify whether that was all he had to show for his charges, among them that he witnessed Mr Kejriwal being handed Rs. 2 crore in bribe money by Satyendar Jain. He has also alleged that “Mr Jain benefited close relatives of Mr Kejriwal in illegal land deals.” The CBI has said it will verify and examine Mr Mishra’s allegation.