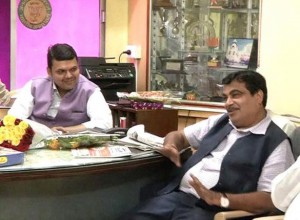 NAGPUR: With the race for the Maharashtra CM’s post hotting up, Gadkari says he is pained to see “unreasonable controversy in the media about Devendra and me.” Two days after show of strength by his supporters in Nagpur, Union Transport Minister Nitin Gadkari on Thursday asserted that he would not be a hurdle to the elevation of State BJP president Devendra Fadnavis as Chief Minister.
Denying rumours of “differences” between the two, Mr. Gadkari reiterated that he was not in the running for the Chief Minister’s post. His comments came after Mr. Fadnavis met him twice, once at the former’s residence and later at the party office in Nagpur, in less than four hours.
Explaining Mr. Fadnavis’ visit, Mr. Gadkari said their families shared a close relationship. “There is no competition between us. We are colleagues. I brought him into politics and his father had brought me into politics” he said. Mr. Fadnavis’ father Ganghdharrao, a prominent Jan Sangh member and an RSS pracharak, is said to have mentored Mr. Gadkari.
‘A customary visit’
Mr. Fadnavis said his visit was a customary call on Diwali.“I just came to wish him on Diwali,” Mr. Fadnavis, who is being considered a front-runner for the Maharashtra Chief Minister’s post, told reporters.Asked about Mr. Fadnavis’s visit, Mr. Gadkari said: “Devendra Fadnavis and I are colleagues and there is no competition between us. I brought him into politics, his father had brought me into politics… we share a very close family relationship. As far as the post of chief minister is concerned, I am nowhere in the race. I have said many times that I am not interested in coming to Maharashtra. I am happy in Delhi.”
On the request of BJP MLAs from Vidarbha to make him the CM, Mr. Gadkari said, “They [MLAs] are just making their wish clear and they have the right to do that. As far as I am concerned, the BJP parliamentary board and the prime minister will take the correct decision.”Mr. Gadkari and Mr. Fadnavis once again came together at the BJP office in Dhantoli here at around 12 noon. However, both of them refused to speak to the media.
Outside the BJP office Mr. Gadkari said, “…it’s painful to see unreasonable controversy in the media about Devendra and me.”
Meanwhile, a source close to the Gadkari camp said the way his side pitched Mr. Gadkari’s name for the chief minister-ship “neutralized” all other OBC leaders who were hoping to get the top job in the State. “With Gadkari in the race for the CM post, Pankaja Munde, Eknath Khadse and Sudhir Manguntiwar, all OBC leaders, and Maratha leader Vinod Tawade fell out of the race. Now the competition is between Gadkari and Fadnavis and Fadnavis is ahead at this point of time.”