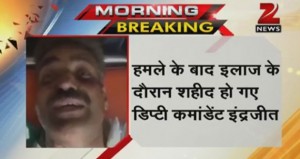 PATNA/RANCHI : At a time when the politicians of all hues are criss-crossing the skies on choppers, a CRPF braveheart, injured in a landmine blast, died pleading for medical help, pleading for a chopper that could take him to the nearest hospital.CRPF Deputy Commandant Inderjit Singh was part of a team that was carrying out search operations in Dibra area of Aurangabad district of Bihar – polling on 10 April.The Maoists have called for boycott of the elections.
The team found improvised explosive devices (IEDs) on Banua-Jharna road. On realising that it would be sometime before the bomb disposal squad could arrive at the scene, the team began to defused it when the landmine exploded. CRPF jawans Panna Rao and Pawan Kumar died on the spot while Inderjit was among the seven who were left injured.
Singh later succumbed to his injuries and would have silently joined the list of fallen soldier, who fades away from the memory soon. However, a video shot hours before Inderjit lost his life has exposed the shocking apathy with which the government machinery treats those who willingly put themselves in the line of fire.
Lying on a stretcher, Inderjeet is seen making heart wrenching pleas to be be saved.  “I will die, no doctor has come to help me in the last two hours…no helicopter has come. I will die, I have little children, save me. President, Prime Minister, Home Minister, DGP please save me, I have two little children, I will die…blood is oozing out of my body, please take me to a doctor,” Singh says to one and all to hurry in getting him medical help.
As no ambulance was available, the CRPF officer was later shifted to the sadar hospital in Aurangabad in a bus. He was later shifted to Ranchi in a chopper. The blast occurred at around 11 am yesterday it was at least 6 hours before he could get proper medical care.Inderjit Singh lost the battle…pleading to deaf ears didn’t help. Another brave solider dies fighting the enemy within our system – apathy towards the value of the lives of the soldiers