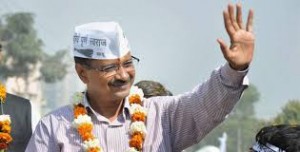 NEW DELHI : the chief of the Aam Aadmi Party or AAP, has been attacked again while campaigning in Delhi for the general election.Mr Kejriwal was today slapped by an auto-rickshaw driver in Sultanpuri in north-west Delhi. His party colleague Manish Sisodia has tweeted that he was injured in his eye.This is the second time that Mr Kejriwal has been attacked in just four days.
He tweeted after today’s attack, “I am just thinking – why am i being repeatedly attacked? Who r the masterminds? What do they want? What do they achieve?… Let them tell me place n time. I will come there. Let them beat me as much as they want, but will that solve the country’s problems?”The attacker, who has been identified as Laali, is in hospital after being beaten by AAP activists. He has reportedly accused Mr Kejriwal of “betraying auto-drivers.”
Thousands of auto-drivers in Delhi actively campaigned for Mr Kejriwal before the December Delhi election, in which the AAP scored an impressive second spot.On Friday, the AAP chief was punched while campaigning at Dakshinpuri in south Delhi. Then too, the attacker had been beaten by AAP workers before he was handed over to the police.
Weeks ago, Mr Kejriwal had reprimanded his party workers for assaulting a man who had attacked him in Haryana. The man climbed onto his jeep and hit him in the neck.Reprimanding AAP supporters who thrashed the man, Mr Kejriwal tweeted, “If we ever become violent, the movement wud be finished. So, pl pl pl, in future, if anyone hits us including me, we shud be nice to him, (sic).”
Last month, the 45-year-old was sprayed with ink and Mobil oil while campaigning in Varanasi, where he is running for Parliament against the BJP’s prime ministerial candidate, Narendra Modi.Mr Kejriwal, who quit as Delhi’s Chief Minister in February after 49 days in power,  has blamed these attacks on rival parties.
Both the BJP and the Congress have condemned the repeated attacks, calling it “unacceptable.”