VARANASI: The Congress party seems to have come out of its confusion of whether fielding a joint consensus candidate against Bharatiya Janata Party prime ministerial candidate Narendra Modi from Varanasi Lok Sabha seat, and is understood to have decided in favour of fielding Ajai Rai as its nominee from the constituency, said party sources in Varanasi. 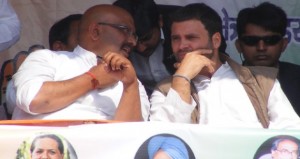 For some weeks, Rai’s name has been among front runners from the Congress probable, even though the party had delayed the announcement in the wake of possibility for a joint consensus candidate by ‘secular parties’ against the BJP prime ministerial candidate.
Rai, a bhumihar, has been a five-time MLA and has switched parties twice. A former BJP man, Rai quit the party after he was denied a ticket for the 2009 polls. Rai then contested them on a SP ticket and finished third behind BJP MP Murli Manohar Joshi and BSP’s Mukhtar Ansari.This year, Ansari has announced its candidature from his own party, Quami Ektata Dal. As reported  earlier, Rai holds sway over a sizeable chunk of the Bhumihar-Brahmin voters, which Modi will have to wean away to seal his victory from Varanasi.
Considered a strongman in eastern UP, Rai was close to several national leaders of the BJP at one time and was hoping to win the party’s candidature in the 2009 Lok Sabha elections.