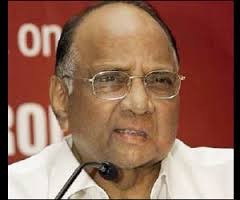 NEW DELHI : who has made several startling statements recently, has been quoted by a Marathi newspaper as predicting that the Narendra Modi-led BJP will be the single largest party after the general elections. Mr Pawar heads the Nationalist Congress Party, a prominent partner of the BJP’s main rival, the Congress. He has said in the interview to Marathi daily Loksatta that the Congress will come in second and regional powerhouses J Jayalalithaa from Tamil Nadu and Mamata Banerjee from West Bengal will vie for third position.
“In the current scenario, BJP will be the single largest party, and Congress will be the second largest, I feel,” he said.He refused to hazard a guess on who would be the next Prime Minister. “For the next 10-15 years, coalition governments will continue. Regional parties will get stronger over the years…. Now there is no consensus over any one leader. Modi won’t become PM. NCP is a small party and hence I am not in the race,” Mr Pawar said.
While Mr Pawar’s assessment is in sync with most opinion polls and surveys, it is unlikely to go down well with the Congress just five days before the first day of polling.
It also comes very close to Uddhav Thackeray, the chief of the Shiv Sena, alleging in an TV interview  this week that Mr Pawar wanted to cross over to the BJP-led National Democratic Alliance or NDA, but he blocked it. Mr Pawar, who has been with the Congress-led coalition for 15 years, emphatically denied the allegation and said Mr Thackeray’s statement was “immature, irresponsible.”
Mr Pawar, 73, enjoys a good rapport with leaders across parties and was known to be close to Shiv Sena founder and Uddhav’s father Bal Thackeray. He was also seen to be warming up to the BJP when he said in February that there was no need for a debate on Narendra Modi’s alleged role in the 2002 Gujarat riots when the courts had ruled on it. He reportedly even met Mr Modi, but dismissed it as routine.
Since then, however, the veteran Maharashtra politician has criticised Mr Modi, even describing him as a person “who needs hospital treatment for talking rubbish,” last Sunday.