NEW DELHI : Actor-turned-politician Nagma, who was seen being pushed at and manhandled by unruly crowds during her campaign in Uttar Pradesh, today denied facing any harassment at all.”Neither did anyone try to kiss me nor did I slap anyone,” she told NDTV, on a day her Congress party asked the Election Commission to provide more security to her.Nagma, 39, is contesting the general election from Meerut. 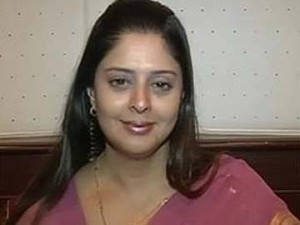 In a letter to the Election Commission, the Congress has said that the “crowds she is attracting require special attention of the local administration to maintain order.”This came on the back of two incidents that were caught on camera in the past two weeks.In the first instance, a Congress legislator, Gajraj Singh, grabbed Nagma’s face and allegedly kissed her on the cheek in visuals that went viral online and were repeatedly shown on TV. Nagma was seen removing his hand and walking off, without addressing the crowd.
Last Friday, chaos erupted again at Nagma’s public meeting, and she was seen slapping a man who allegedly groped her.But she denied both incidents today, dismissing them as “humbug.”Of the Congress legislator who allegedly manhandled her, she said, “(Gajraj Singh) is the only legislator we have from there. He treats me like a daughter. He wanted to talk to me about something sensitive; he isn’t media savvy.”
The actor had reportedly hired bouncers and guards after the incident.The Congress has neither reported the legislator, nor punished him, which led to allegations that the party does not want to risk any trouble from a legislator who claims a strong following and can damage its chances of winning in Meerut.Nagma also denied saying she would stop going to Meerut due to the blatant harassment. “One has to enjoy the ride, though it is a little hectic. I’m putting my best foot forward.”