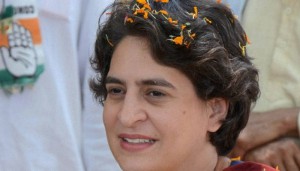 BANGALORE: In an embarrassment to the Bharatiya Janata Party, which sits in Opposition in Karnataka, a party MLA on Wednesday courted controversy as he purportedly watched the zoomed in photo of Priyanka Gandhi on his mobile phone inside the Legislative Assembly.
BJP MLA for Aurad, Prabhu Chavan, was yesterday caught on camera looking at Priyanka’s photo during a serious debate on sugarcane pricing in the Assembly.Another party MLA, UB Banakar, from Hirekerur in Haveri, was found playing Candy Crush Saga game on his mobile.
In the video clippings telecast on local TV channels, MLA Prabhu Chavan was also shown watching photos of Prime Minister Narendra Modi, Bollywood actor Riteish Deshmukh and former prime minister Rajiv Gandhi along with Sonia Gandhi.
In the wake of the incident, Legislative Assembly Speaker Kagodu Thimmappa said he was pondering over banning mobiles in the Assembly.
Asked about his conduct which has left the BJP red-faced, Chavan maintained he was flipping through pictures on mobile, including that of Modi.When he came across a Priyanka Gandhi’s picture, he zoomed into it to read the slogan below. There was nothing objectionable in his zooming in the picture, he said.
“No no there was a slogan below, I was watching it, I can show you. I was watching slogan below (the photo).”
“By mistake I took it (phone) inside. I agree it is my mistake, but I have seen nothing with bad intention. I was checking photos of national leaders, I checked Narendra Modi photo…. I also checked my son’s photos….,” Chavan told reporters here.”….Nothing of that sort, taking it (mobile) inside is a mistake and I agree it was my mistake…,” he added.
Another BJP MLA UB Banakar was caught on camera playing online games on mobile phone oblivious of the discussion about the plight of sugarcane growers to whom sugar mill owners owe huge arrears.The footage of both the MLAs seated separately was captured by a TV cameraman from the elevated media gallery and beamed by Kannada TV channels.
The legislature is holding the 10-day Winter Session here.This is not the first time a BJP MLA has been caught indulging in “inappropriate” behaviour in the Assembly. Earlier, the then BJP ministers in the BS Yeddyurappa government – Laxman Savadi, CC Patil and Krishna Palemar were caught watching a porn clip on a mobile phone during the session. The BJP had later sacked the ministers.