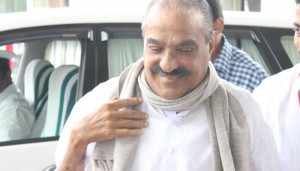 THIRUVANANTHPURAM: In a setback for Kerala Finance Minister KM Mani, an FIR has been registered against him in connection with the bar bribe case.The FIR was registered on Thursday by the state’s Vigilance and Anti-Corruption Bureau, after initial probe found prima facie evidence against the minister.

According to VACB sources, the case against Mani, who is Kerala Congress(M) supremo, was registered on the basis of statements given by some of those questioned by investigators as part of a preliminary inquiry into the allegation that he had taken a hefty sum as bribe from bar owners for decisions favourable to them.

As the next step, a special investigation team would be constituted by the VACB for a detailed investigation in the case which pertains to the allegation levelled by Biju Ramesh, working president of Kerala Bar Hotel Owners Association, about two months back.
The LDF leaders demanded resignation of Mani, who is away in New Delhi to attend a meeting of state Finance Ministers convened by Union Finance Minister Arun Jaitley.But the second rung leaders of his party put up a brave face and said there was no need for him to quit simply because a case had been registered.
Earlier, the Kerala High court had last week rejected a plea for registration of an FIR against Mani.
A Division Bench, comprising Acting Chief Justice Ashok Bhushan and Justice A M Shaffique, while disposing of petitions by LDF convenor Vaikom Vishwam and CPI MLA VS Sunil Kumar, had directed Vigilance Director to take independent decision in accordance with statutory provisions within one week of receipt of the preliminary report.
Alleging that Vigilance’s quick verification against Mani, was a ‘farce’, the LDF convenor and CPI MLA had moved the court in separate PILs seeking to draw up an FIR and register crime against the minister.The LDF had also sought setting up of a SIT to probe the case and wanted court to monitor the same.
Mani has been accused of demanding bribe to allow the reopening of 418 bars shut down in the state in the wake of change in liquor policy.Whistleblower bar owner Biju Ramesh has alleged that Rs 1 crore was given to Mani as the first instalment of the Rs 5 crore he had demanded.
The opposition Left parties have been demanding Mani’s resignation, saying Chief Minister Oommen Chandy and his cabinet were shielding the minister.