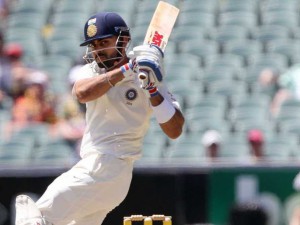 Virat Kohli survived a hit on the helmet by a Mitchell Johnson bouncerin the first ball he faced, to slam his seventh hundred in 30 Tests as India responded strongly to Australia’s 517/7 declared on Day 3 of the opening match at the Adelaide Oval. Kohli became only the third Indian after Vijay Hazare and Sunil Gavaskar to score a hundred on captaincy debut.
Kohli brought up his ton off 158 balls as India reached 331/4 in the 85th over during the final session on Thursday.
Kohli copped one on the badge of his helmet off the first delivery he faced, failing to swing away in time from Johnson’s short-ball. The Australian fielders, in a rare sight, rushed in to check if the Indian captain was alright. As David Warner, Brad Haddin, Michael Clarke, Chris Rodgers and Johnson converged on the batsman, Kohli checked his gear and got on with it.
Get on with it he did, as Kohli slammed some exquisite shots to lead India’s reply, first in the company of Cheteshwar Pujara (73) before stitching a 101-run stand with Ajinkya Rahane (62) to put the visitors in a comfortable position on a flat pitch.

Kohli has earned the respect of the Australian players on this tour, after his exemplary behavior following Phillip Hughes’ tragic death two weeks back. He was among the first to attend the fallen Aussie cricketer’s funeral and has said all the right things in the lead-up to the first Test. Kohli also did not shy away from the challenge of facing Johnson and said India were not intimidated by his pace.

On Thursday, despite taking a blow on the head, Kohli appeared unnerved and took the Australian attack to the cleaners, picking the gaps beautifully. He has come a long way since his maiden Test century, a composed 116 on January 24, 2012 at the same venue. Back then, he had celebrated with a string of abuses, presumably hurled at the Australian fielders. However, two years later, Kohli is a far more matured and a much revered figure internationally, especially in the Australian cricket fraternity.

Kohli had had a disastrous tour of England earlier in the year and drew severe critism for his poor technique, away from Indian featherbeds. However, this hundred should put to rest Kohli’s detractors and give his fans more reasons to cheer about.