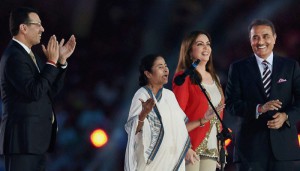 KOLKATA: It was an evening to remember for the people residing in ‘Mecca of Indian Football’ as a riot of colours lit the Salt Lake skyline with much awaited Indian Super League (ISL) doing everything possible to strike the right chord with the football aficionado.
ISL FULL COVERAGE || GALLERY || TEAM GUIDE || AS IT HAPPENED
Touching the hearts of the football-loving crowd, chairperson of IMG-Reliance and founding Chairperson of Football Sports Development (ISL) Nita Ambani formally declared open the ISL.
“Ami Indian Super League er Subho Suchona Korchi (I declare the auspicious opening of ISL)– I formally declare the Indian Super League open,” she said surrounded a rare amalgamation of Bollywood and cricket and world football celebrities who represented the eight franchises.
The fireworks lit up the sky in a full capacity Vivekananda Yuva Bharati Krirangan to conclude a 45-minute opening ceremony as the 70,000 capcity crowd were treated to some eye-catching visual extravaganza.
Related Photo Gallery.
Amid the confluence of Bollywood superstars, renowned sportpersons, corporate magnates and politicians, it was master blaster Sachin Tendulkar who drew the maximum applause.With chants of ‘Sachiiiiin, Sachiiiiin’ reverberating the colossal stadium which had the earlier capacity of 120,000 now reduced to 72,000, crowd gave a standing ovation to the retired legend.
For a moment, it felt Tendulkar was once again going into the middle to take guard before the reality took over as clad in yellow t-shirt Tendulkar and his Kerala Blasters marquee player David James made the entry into the centre podium.
Bollywood diva Priyanka Chopra was the highlight of the show as she made a grand entry with Bollywood chartbusters ‘Tune Mari Entriyaan’, ‘Ram Leela’ before welcoming the crowd in Bengali style — ‘Kemon achen Kolkata!’
Starting with Atletico de Kolkata, Priyanka called the team owners one by one on to the centre stage and quipped to Sourav Ganguly: “Dada chose to own a football team because he can remove jersey whenever he wants…”
Ganguly-Luis Garcia (Kolkata) were followed by Parineeti Chopra and Italian World Cup winner Alessandro Del Piero (Delhi).
John Abraham was parraded alongside New Zealand marquee manager Ricki Hebert (Guwahati), Dattaraj Salgaocar and Robert Pires (Goa), Abhishek Bachchan and marquee player Elano Blumer(Chennai), Hrithik Roshan and French World Cup winner David Trezeguet (Pune), Ranbir Kapoor and Fedrik Ljungberg (Mumbai) and Tendulkar- David James (Kerala) were called one by one by star perfomer Priyanka.
The ceremony began at 5.20 pm with West Bengal chief minister Mamata Banerjee, ISL founding chairperson Nita Ambani, AIFF president Praful Patel and Atletico de Kolkata co-owner Sanjiv Goenka leading on the centrestage to convey their heartfelt thanks.
Urging the country to promote the sport, CM said: “Thank you so much for choosing Kolkata for the opening ceremony. Lets’ love football, eat football, think football, sleep football and drink football.”
Terming it a dream come true, Patel said: “This is a dream come true. It’s a great opportunity for us to take this game to every corner of the city. Special thanks to Nita Ambani and IMG-Reliance.
“I will assure that we will not leave any stone unturned to make this ISL a super success.100 boys and equal number of girls in the age group of 12-14 and 100 dance performers kicked off the opening ceremony in which over 600 illuminated footballs were used as props, making it a delight to watch as fireworks lit up the sky.
The performance by the children culminated in a dramatic formation of the ISL logo.
Percussionist Sivamani then took the centre stage with a brilliant performance with 160 Indian musicians with eight musical maestros enthralling the audience to some melodious Indian music and drum beats.
There was also focus on the beautiful game with a quick video montage highlighting the International and Indian footballing talents on display in the inaugural franchise league.
The ISL ensured to pay a tribute to the golden era of Indian football from 1951-1962 in a theme titled ‘Blazing Feet Of Indian Footballing Legends’.
There was also a tribute by eight musical maestros representing each of the eight franchises and regions, who was accompanied by nearly a 160 musicians.
Representing Kolkata at their home venue was Bickram Ghosh, while Sivamani played out for Chennai.
Aslam Dafrani represented Delhi, while Bondo and Taufiq Qureshi will represent Goa and Mumbai respectively.Adding to the atmosphere was the Chenda players representing Kerala, the Manipuri and Assam folk artists from the North East and Puneri dhol players representing Pune and all of them were accompanied by 160 lezim players.
The memorable opening ceremony came to a close amid fantastic fireworks, with a special rendition of the League anthem being performed by Salim Merchant.
Also present in the gathering were honourable Minister of Youth Affairs and Sports Sarbananda Sonowal.
City franchise Atletico de Kolkata will take on Mumbai City FC to kick off the inaugural franchise league that will conclude on December 20.