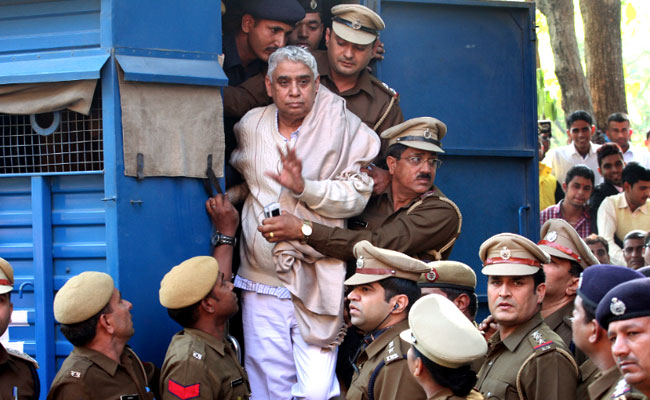 CHANDIGRAH : Haryana, still tense over the conviction of self-styled guru Gurmeet Ram Rahim Singh, will today learn if another self-declared religious leader is guilty of murder. Satguru Rampalji Maharaj heads a sect that worships the 15th-century poet and mystic Kabir, who is known for a message of tolerance.
He was arrested in 2014 after resisting arrest at his sprawling ashram located in Hisar in Haryana, 170 kms northwest of Delhi. Yesterday, Ram Rahim Singh was sentenced to 20 years in prison for raping two women devotees in 2002. His conviction on Friday incited riots in Haryana which included buses and cars being set on fire. 38 people were killed and nearly 200 injured.

In 2014, the police deployed water cannons as they forced their way into Rampal’s ashram after a days’-long standoff. Devotees fought back with guns, rocks and lathis or batons. After the operation to evacuate thousands of Rampal’s followers was completed, the bodies of four women who apparently died inside the complex were found. There were no bullet marks or injuries on the dead and they did not die in the rescue, the police said at the time. Another woman and baby died in hospital after leaving the ashram.

Rampal, former engineer, is accused of ordering a murder; 6 people died, 100s were injured in violence
Nearly 10,000 people, many of whom were reportedly being held against their, were removed from the ashram. But before that, the police had to breach a lengthy human chain of men, women and children in their bid to access Rampal, who is now 67 years old and used his followers as human shields. Nearly 200 people were injured. Rampal, a former engineer, was taken away in an ambulance by the police.

The lengthy siege at the ashram, about 12 acres large, was initiated after a local court ordered the arrest of Rampal in a 2006 murder case – he is accused of telling supporters to fire on villagers, killing one and injuring six. The guru had by then ignored more than 40 summons to go to court.
His followers claimed he was not at the walled compound, but receiving medical treatment at an undisclosed location. The police then decided to enter the hermitage by force after cutting off water and electricity did not flush out thousands of devotees.

Rampal now also faces separate cases with charges of sedition, murder, criminal conspiracy and detaining people illegally in his fortress.Some of those evacuated told police they had been held against their will for days, and given little food or water .The clashes were the first major incident of violence after Chief Minister ML Khattar took charge of Haryana.