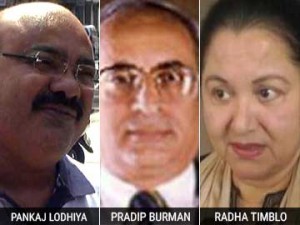 NEW DELHI : Days after Finance Minister Arun Jaitley spoke to A TV Channel about a revelation that would “embarrass the Congress”, the government named eight people in the Supreme Court in connection with untaxed or black money in foreign accounts – but none of them are politicians.
Pradip Burman of the Dabur India group, bullion trader Pankaj Chimanlal Lodhiya and five members of a family, all directors of a Goa-based mining company called Timblo Private Limited, have been named in the government’s affidavit on black money in court.
All eight people named today are being prosecuted for alleged tax evasion as money was found in their foreign accounts that was unaccounted for, the government has said.Timblo has political links, alleges the Association for Democratic Reforms, an independent election watchdog that says the company donated nine times to the BJP and three times to the Congress in seven years.
The company’s Radha Timblo said “at different times there were some searches, raids” but said she would comment on the affidavit later.Pradip Burman is no longer a part of Dabur, one of India’s top consumer goods companies, but he is listed as a promoter.
“We wish to state that this account was opened when he was an NRI, and was legally allowed to open this account. Complete details regarding the account have been voluntarily, and as per law, filed with the Income Tax Department, and appropriate taxes paid,” a Dabur spokesperson said.
Pankaj Lodhiya also denied any wrongdoing, saying, “I do not have any Swiss account. I have declared all assets and I have not been served any notice.”The government told the court that it has no intention of withholding names, which would be revealed in cases where tax evasion was established, as required by international tax treaties.
“Every foreign account held by an Indian may not be illegal and names cannot be disclosed unless there is prima facie evidence of wrongdoing,” the government said.
Today’s disclosure came as sources said four Congress leaders, including a former junior minister and two members of a Maharashtra political family, are under investigation for black money.
“The Congress party will spare no one found guilty of corruption. But Arun Jaitley made a mischievous remark saying it will embarrass the Congress. If he has the guts, he should reveal the names,” said Congress leader Digvijaya Singh.