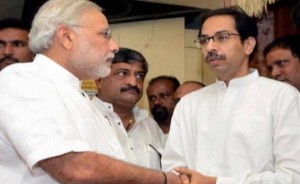 MUMBAI: The BJP’s endurance test for the Shiv Sena is delivering results. In new shows of courtesy, the Shiv Sena and its top leaders are offering vast praise for the BJP, the Prime Minister and the man likely to be Maharashtra’s next chief minister, Devendra Fadnavis.
Sources confirm that on Friday, the BJP, which won the most seats in the state election, will have its ministers take their oath at a ceremony attended by the Prime Minister. The BJP does not have an outright majority, but it has a menu card of options for forming the government.
The BJP has an offer of support from Sharad Pawar’s NCP;  it could recast its alliance with the Sena, which placed second in the elections; the BJP has also said it’s working on winning over independents to bolster its strengthShiv Sena sources claim that their chief Uddhav Thackeray is “talking directly” with PM Modi and BJP chief Amit Shah to forge a deal.
So far, however,  the BJP has refused to put the Shiv Sena out of its misery by indicating whether a merger will be renewed. The Shiv Sena has made it clear that it treats the partnership as unstuck only in Maharashtra. Its law-makers were conspicuously present at a tea party hosted for allies by the PM on Sunday.
In an attempt at make-good, the Sena, in an editorial in its mouthpiece today, credited both the Prime Minister and Mr Shah for winning Maharashtra. Earlier editorials tolled the PM and his party with a marked lack of restraint.
“Fadnavis ji has done great work in Maharashtra,” said Sanjay Raut of the Shiv Sena, promising his party’s support for “a Chief Minister who will take Maharashtra to new heights.”
Tomorrow, senior BJP leader Rajnath Singh is slated to be in Mumbai to attend a session where law-makers are expected to elect Mr Fadnavis as their leader and so the new Chief Minister.