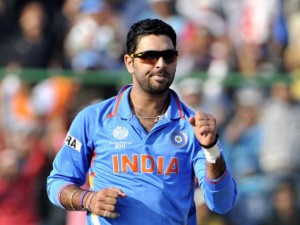 NEW DELHI: Yuvraj Singh, Ishant Sharma and Kevin Pietersen will be among the eight marquee players up for grabs at the IPL 2016 Player Auction schduled to take place in Bengaluru on February 6.
As many as 351 cricketers will go under the hammer, out of which 230 will be Indians and 131 foreigners.Interestingly, there are 29 Australians amongst 130 capped players in the auction list, three more than the number of capped Indians.
The capped players from other countries taking part in the auction come from South Africa (18 players), West Indies (20), Sri Lanka (16), England (7), New Zealand (9) and Bangladesh (5), besides the associate nations of Canada (2) and Ireland (2).
A total of 219 uncapped players will feature in the auction, with 204 of them being Indians playing on the domestic circuit.Yuvraj and Ishant are the two Indian marquee players and it remains to be seen how they fare in the auction after being released by their respective teams.
Yuvraj has been released by his franchise, Delhi Daredevils and Royal Challengers Bangalore, for the last two seasons after attracting the highest bid in the previous auctions, while Sunrisers Hyderabad let go of Ishant after he had a forgettable last edition where he picked up one wicket in four games.
The remaining six marquee players are Shane Watson, Aaron Finch, Dale Steyn, Dwayne Smith, Martin Guptill and Pietersen.
“The player auction will kick-start the countdown to the ninth season of one of the most popular sporting events in the world.
The franchises have returned to the drawing board, reworked plans and devised new strategies, over the last few months.
They will have the opportunity to bid for some of the biggest names in the game,” IPL Chairman Rajeev Shukla said.